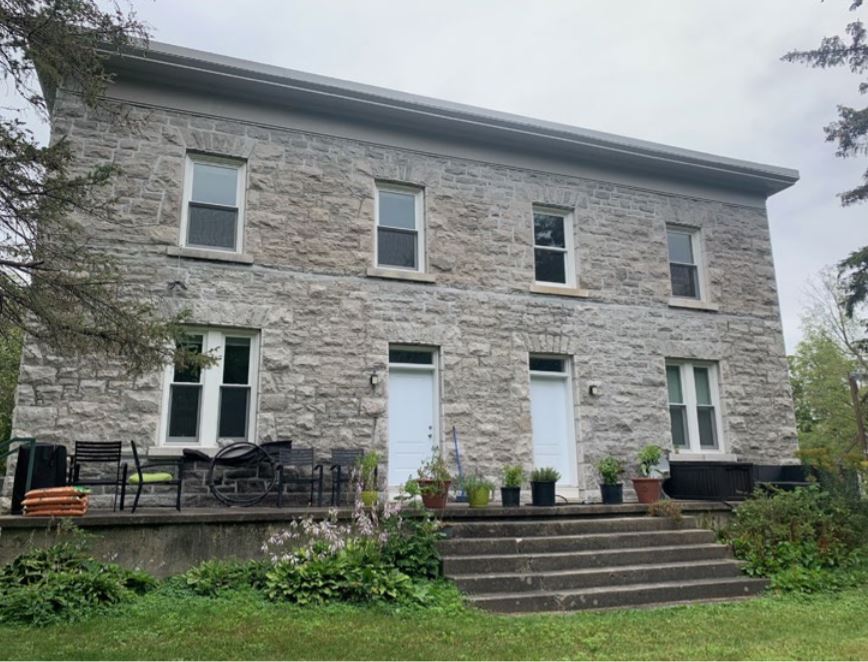 JAMES MATHER WAS BORN IN 1833 in the Scottish fishing village of Usan, located about 60 miles (100 km) along the North Sea coast from Edinburgh. His father, a contractor and inventor, gave James practical knowledge about building and construction, while the Bowan Academy, in nearby Montrose, introduced him to architecture and the design of buildings. When Mather arrived in Ottawa in 1872, he was almost forty years of age. His previous experience as an architect is not known, nor the reason for his choice of Ottawa, but soon after his name appeared in the city directory’s list of architects in 1873, he was designing buildings.

In 1874, he prepared the plans for two new market buildings for the city, one in the ByWard Market, the other in Upper Bytown, both large, two-storey brick structures, decorated with towers and iron crestings. He also designed two primary schools and he became associated with the new Beechwood Cemetery, preparing plans for residences, at the cemetery, for members of the staff, which are still in use. He later became president of the Beechwood company.

Many leading citizens had Mather design their houses. For businessman B. Batson’s “Gothic villa”, a three-storey stone residence built in 1875, Mather provided, among its many rooms, a large drawing room, a spacious hall and a conservatory measuring 16 by 45 ft. (5 by 14m). Mather also designed a residence, on Laurier Ave., for jeweller John Leslie, completed in 1878. It was later occupied by two prime ministers, Sir Wilfrid Laurier and William Lyon Mackenzie King. The later bequeathed it to Canada and it became a museum.

Mather’s involvement in the construction and later development of Lisgar Collegiate and the Teachers’ College (Normal School), started when the college was built in 1875. Its Toronto architect, W. R. Strickland, appointed Mather to be the supervising architect and Mather was involved in its additions, a model school for teacher training and an assembly hall. Lisgar Collegiate was constructed in 1875 to plans drawn by Montreal architect William T. Thomas, but when the building was enlarged in 1892 Mather was the architect, also for a 1903 addition, and for a five-storey dormitory for another institution, the Ottawa College, the dormitory called the finest such building in America.

Mather’s design for the First Baptist Church at Elgin St. and Laurier Ave. W. was in the Gothic revival style of architecture, with a tall slender tower. The corner stone was laid in 1877 by Prime Minister, and church member, Alexander Mackenzie, and another Prime Minister, John Diefenbaker, also attended the church. Mather designed many buildings important to Ottawa’s social, business and political activities, such as the Rideau Club building. When formed in 1865, the club rented space from a hotel until Mather designed its first building which it occupied from 1875 until 1911. A larger structure replaced it but was destroyed by fire in 1979.

In 1882 the Russel House, one of Bytown’s early hotels, was completely rebuilt and enlarged to Mather’s design. It was Ottawa’s finest hotel and considered to be “the political headquarters of the Dominion” until its destruction, by fire, in 1928. The nearby Roxborough Apartments, also built to Mather’s plans, were favoured by politicians such as Prime Minister Louis St. Laurent who reluctantly gave up his suite there when an official residence, for prime ministers, was established on Sussex Drive in 1950. The Roxborough Apartments were demolished in 1965 for the construction of a museum proposed for the site but not built.

Two monuments in Beechwood Cemetery are memorials to James Mather; the first, in Section 41, marks his grave. Another monument, in Section 39, marking the grave of Andrew Main who died in 1884, provides another memorial to Mather, since his name is inscribed on its base, identifying him as its architect.