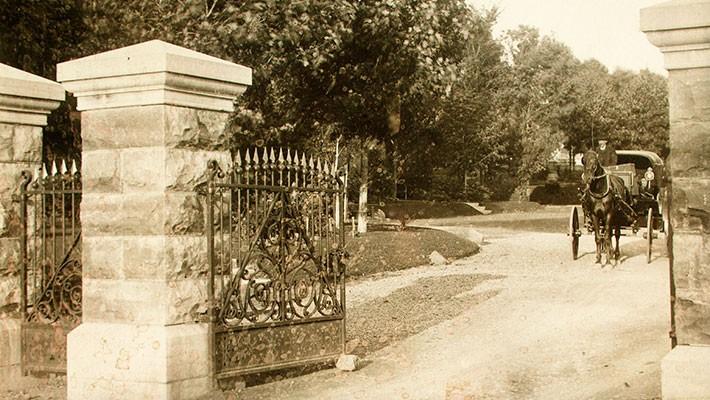 Beechwood Funeral, Cemetery & Cremation Services was founded in 1873 just fourteen years after Queen Victoria selected Ottawa as the capital of the Dominion of Canada. At that time, city council had decreed burials were not permitted within the city limits, so Beechwood was located beyond what were then Ottawa’s boundaries. Stretching over 160-acres of land, Beechwood now resides on part of the original McPhail farm (100 acres) and the MacKay/Keefer estates. It became a prime example of the type of rural cemetery that emerged in the United States and Canada in the 19th century characterized by winding roads, picturesque vistas, wooded groves, unique landscaping, as well as monuments and markers of considerable architectural and historical interest.

The original shareholders of The Beechwood Cemetery Company of Ottawa were prominent residents, led by Joseph M. Currier. The home originally owned by Currier would later become the official house of Canada’s Prime Ministers.

In the 1920s, an important construction project started at Beechwood: the erection of a mausoleum.  Built in a Gothic architecture style, (first introduced to Ottawa when the Parliament Buildings were constructed) provided a final resting place for many important Canadians including Father of Confederation, William McDougall. Forty years later, the lower level of the mausoleum became home to a crematorium. At that time few people selected cremation, but now cremations outnumber casket burials 3-1. To meet today’s needs, Beechwood constructed a new crematorium in 2014 on a different area of the property.

Originally perceived to be the Anglo-Protestant cemetery of Ottawa, today Beechwood is a reflection of Canada’s identity as a multicultural, multi-faith society with sections reserved for religious and ethno-cultural communities. This shift began in the 1920’s when the Chinese community wanted to have a section within the cemetery. Beechwood, being one of the oldest and largest cemeteries in Ottawa, naturally was the perfect fit to be the final resting place for their community. It is designed according to Chinese religious principles, and distinguished by a Pagoda to honour the community’s ancestors.

Beechwood is proud to now have sections set aside and specifically designed to meet the interment needs of the Chinese, Egyptian, Greek, Lebanese, Latvian, Muslim, Polish, Portuguese, Ukrainian and Vietnamese communities.

The Beechwood Cemetery Foundation was created in 2000 for the purpose of safeguarding the cemetery’s future, and increasing public awareness of the cemetery and the important events of Canadian history associated with persons buried within it. Since then, Beechwood has grown in national significance, first becoming the home of the National Military Cemetery of the Canadian Forces, then being recognized as a National Historic Site in 2001 and finally by becoming the home of the RCMP National Memorial Cemetery in 2004. This culminated in 2009 with Beechwood’s designation as the National Cemetery of Canada by way of Bill C-17, an Act of Parliament that received all-party support in the House of Commons. In 2011, Beechwood became the Ottawa Police Service Memorial Cemetery.

Today, due to a recent change in provincial regulations, Beechwood is a full-service provider in the bereavement industry. This means that together with the approximate 35 acres of undeveloped cemetery land and their on-site crematorium Beechwood now also provides a broad choice of funeral styles, from catered receptions, life celebrations and memorial services, to traditional funerals. Being able to provide funeral, cemetery and cremation services all in a location of unparalleled beauty is a great service to the Ottawa community.

With almost 400 famous burials, and over 85,000 total burials of people from all walks of life, Beechwood serves as a place of national tribute and remembrance for all Canadians.