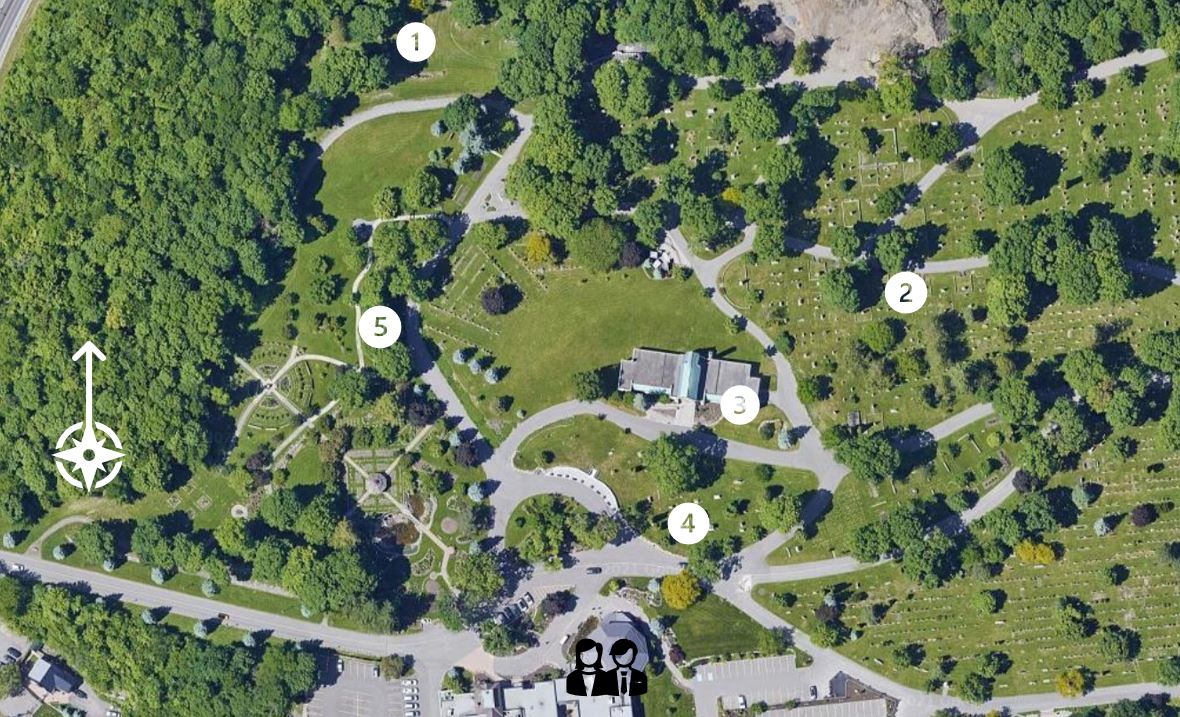 For over a century, until 1996, the Canadian Government removed at least 150,000 First Nations, Métis and Inuit children from their families to place them in Indian Residential Schools created by and run by Christian churches. Thousands died of disease, neglect, or mishap; many suffered physical, spiritual and sexual abuse. In 2008, Survivors forced an apology from the Prime Minister, “for failing them so profoundly.”

In 2015, the Truth and Reconciliation Commission (TRC) called the schools “cultural genocide.” Beginning in 2014, Beechwood Cemetery, Funeral, and Cremation Services and the Beechwood Cemetery Foundation have collaborated with the Indigenous community to create the Reconciling History program. Beechwood has partnered with the First Nations Child & Family Caring Society and KAIROS Canada.

With the ultimate goal of education and awareness, Beechwood strives to show both sides of history by not excluding the impact many prominent Canadians buried in the grounds had on the Indigenous community. Choosing rather to highlight both their achievements and their shortcomings to provide a rounded view of history.

The Reconciling History program aims to foster respect and healing through education. The Reconciling History Tour focuses specifically on those who were involved with the Indigenous Community. Those like Dr. Peter Henderson Bryce; who while working at Indian Affairs documented the health crisis in the Residential school system, and Nicolas Flood Davin who wrote the report used as the foundation for creating the residential schools.

1. Dr. Peter Henderson Bryce (August 17, 1853 – January 15, 1932) served as the first secretary of the Provincial Board of Health of Ontario from 1882 to 1904, when he was appointed the Chief Medical Officer of the federal Department of Immigration. Bryce was hired by (then) Indian Affairs Department in Ottawa to report on the health conditions of the Canadian residential school system in western Canada and British Columbia. His report was never released by the government but was published by Bryce in 1922 under the title The Story of a National Crime: Being a Record of the Health Conditions of the Indians of Canada from 1904 to 1921.

Bryce claimed that Indigenous children enrolled in residential schools were deprived of adequate medical attention and sanitary living conditions. He suggested improvements to national policies regarding the care and education of Indigenous peoples. Bryce noted that the lack of certainty about the exact number of deaths was, in part, due to the official reports submitted by school principals and "defective way in which the returns had been made." He appealed his forced retirement from the Civil Service in 1921 and was denied, subsequently publishing his suppressed report condemning the treatment of the Indigenous at the hands of the Government of Canada.

2. Nicholas Flood Davin (January 13, 1840 – October 18, 1901) was a lawyer, journalist and politician, founder and editor the Regina Leader, the first newspaper in Assiniboia. He tried to gain provincial status for the territory. He was a prominent advocate for woman getting the right to vote.

3. William MacDougall PC CB (January 25, 1822 – May 29, 1905) was a Canadian lawyer, politician, and one of the Fathers of Confederation. Once the dominion formed, he served as Minister of Public Works in the Macdonald government. McDougall was appointed Lieutenant Governor of Rupert's Land and the North- Western Territory in 1869.

However, when McDougall tried to enter Rupert's Land from the Dakota Territory down the Red River, he was turned back near the border by Métis Resistence under Louis Riel's Leadership before he could establish his authority at Fort Garry (now Winnipeg, Manitoba). Dispatches on microfiche at the Main Library of the City of Toronto include his request for 1,000 British troops to be sent on the authority of Queen Victoria. McDougall was a Canada First nationalist and espoused deep anti-Catholic and anti-Indigenous views. He has also been called "vain, erratic and irredeemably pigheaded".

4. Duncan Campbell Scott CMG FRSC (August 2, 1862 – December 19, 1947) was a Canadian civil servant, and poet and prose writer. Scott served as deputy superintendent of the Department of Indian Affairs from 1913 to 1932. He supported the government's assimilationist policy toward Canada's First Nations, Inuit and Métis peoples. In 1920, under Scott's direction, and with the concurrence of leaders of the religious groups most involved in Indigenous education, the Indian Act was amended to made it mandatory for all Indigenous children between the ages of seven and fifteen to attend school. Attendance at a residential school was made compulsory, although a reading of Bill 14 says that no particular kind of school was stipulated.

Scott was in favour of residential schooling for Indigenous children, as he believed removing them from the influences of home and reserve would hasten the cultural and economic transformation of the whole Indigenous population. In cases where a residential school was the only kind available, residential enrollment did become mandatory, and Indigenous children were compelled to leave their homes, their families and their culture, with or without their parents' consent. Today he is known more for his implementation of this policy, especially the mandatory education of indigenous children. Canada's Truth and Reconciliation Commission has characterized this policy as genocide.

5. Olive Patricia Dickason CM (March 6, 1920– March 12, 2011) was a Métis historian and journalist. She was a key figure in the study of Indigenous history in Canada's academic world. In 1970, aged 50, she entered the graduate program at the University of Ottawa. She had to struggle with faculty preconceptions regarding Indigenous history.

She completed her master's degree at the University of Ottawa with the thesis Louisbourg and the Indians: A study in imperial race relations, 1713–1760 two years later, and her PhD in 1977. Her doctoral thesis, entitled The Myth of the Savage, was eventually published as were Canada's First Nations: A History of Founding Peoples from Earliest Times and The Native Imprint: The Contribution of First Peoples to Canada's Character -- Volume 1, To 1815 (1995), which she edited. In addition she also wrote Indian Arts in Canada, which won three awards for conception and design and coauthored The Law of Nations and the New World. Dickason taught at the University of Alberta from 1976 to 1992.