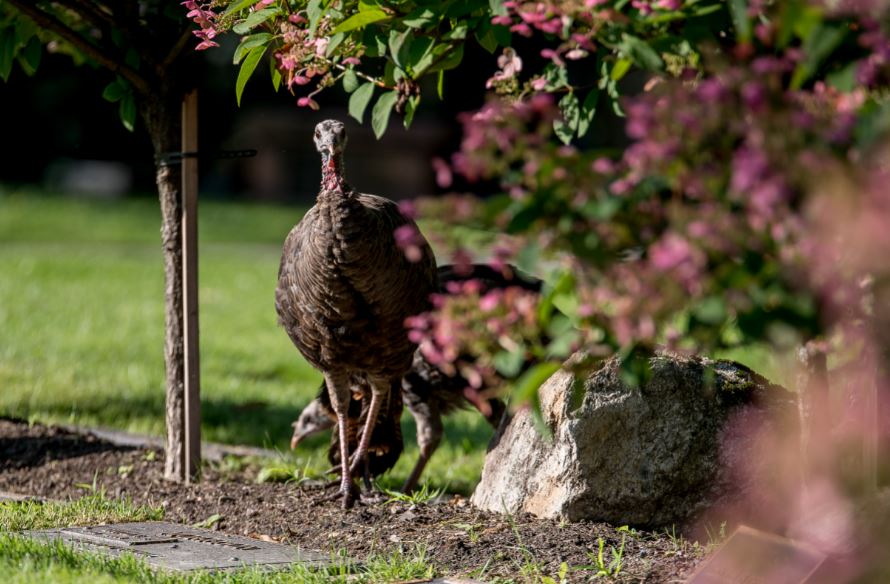 Beechwood is home to a few families of Eastern Wild Turkeys that can be seen around the Cemetery ground. The Eastern wild turkey is native to southern Ontario and Quebec.

The wild turkey is a member of the order Galliformes, which includes pheasants, chickens and quails. They are characterized by heavy-set bodies, colourful plumage, and the call males make to attract females, known as a “gobble.” Wild turkeys are the heaviest of Galliformes.

Males weigh between 8.1-13.6 kg, and females between 3.6-6.3 kg. Males are called “toms” or “gobblers” and are much more colourful than females. Their naked heads are coloured in hues of red, blue and white, and their body feathers include shades of dark brown, bronze, copper, chestnut, purple and iridescent green. Their fantail feathers are striped brown, white and black. The tips of their tails are also brown, tan, white or black, depending on the subspecies. When displaying their fantail, males appear almost twice their size.

Female turkeys are called “hens.” They do not have fantails, and although they may have the same spectrum of colours as toms, the colours are much duller. Mating season takes place between February and June, depending on latitude and climate. Males strut, fan their tails, gobble and dance around. After mating, females search for nesting sites hidden from predators, and they scratch the earth to create shallow depressions to lay their eggs in. Female Eastern wild turkeys lay on average 10 to 12 eggs per brood. Hens frequently reposition their eggs in order to make sure all surface areas receive adequate body heat. Wild turkey hatchlings are born fully developed and grow very rapidly. Within the first week, chicks can perform species specific behaviours, and by 14 weeks they’ve developed their distinctive male and female plumage. Wild turkeys have separate habitats for breeding and non-breeding seasons.

During breeding season, wild turkeys prefer open pastures, agriculture fields, areas near streams and rivers, open forest areas and meadows. These areas provide the insects and seeds that form the majority of their diet, especially for growing chicks.

During non-breeding season, wild turkeys can be found in open, mature forests of mixed hardwood and softwood where they often like to roost. Eastern wild turkeys have the largest range of all the Meleaagris gallopavo subspecies.

They have adapted to various types of habitats across North America. Wild turkeys are opportunistic foragers and eat a variety of items such as nuts, fruits, seeds from grasses and sedges, insects, snails, frogs, salamanders and crayfish. They are generally crepuscular, meaning they forage in early morning and late afternoon.

Horticultural Program
The Macoun Marsh
Written by | July 13, 2020
Share this: