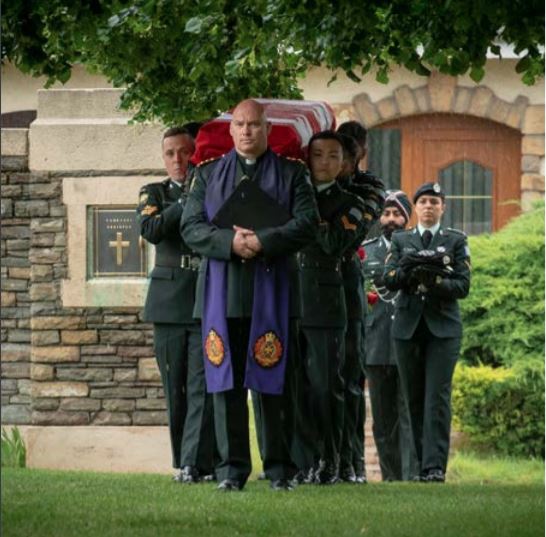 Since April 2019, Beechwood stepped into its role as the Mortuary Service Provider and Contract Representative of The Department of National Defence’s Casualty Identification Program.

The Program was established in 2007 in response to an increase in the discovery of human remains believed to be Canadian war dead from the First World War, Second World War and United Nations Operations in Korea.

Remains are being discovered following construction projects or from farmers plowing their fields in former battle areas of course the local authorities are contacted and it is realized that the remains are quite old, and in some instances are being located with military artefacts. Once it is believed the remains are that of war dead, the Commonwealth War Graves Commission (CWGC) take possession of the remains until the appropriate nation can be determined and contacted.

As part of the identification process, Dr. Lockyer reaches out to the various other members of the program to help confirm the identification of the discovered remains. The Program enlists the assistance of Historians,Forensic Archaeologists, Forensic Odontologists, a Genealogical Researcher, a DNA lab, a Stable Isotope Lab; in addition to Beechwood’s assistance.

As the Contract Representative, Beechwood assists Dr. Lockyer in tasking work requests, maintaining timelines, and communication with the various labs, the genealogical researcher and other Program members. Beechwood also secures the remains that are in the care of Dr. Lockyer for analysis within Canada.

One very interesting note is that should the remains be identified as Canadian soldiers who died in battle prior to 1970, their remains are not repatriated to Canada for burial as per the December 1918 Report of the Imperial War Graves Commission (now the CWGC). Rather, the burial is arranged in a Commonwealth War Graves Commission cemetery with their fellow soldiers near to where they fought and fell for their country. With this in mind, under direction of Dr. Lockyer and her National Defence colleagues, Beechwood is responsible for arranging for specially designed Canadian maple caskets or reliquaries, the attendance of funeral staff, funeral vehicles, and flowers overseas that meet the Canadian Armed Forces requirements for the burial ceremonies of our confirmed Canadian war dead.

Following the First and Second World Wars and the Korean Conflict, there are nearly 28,000 Canadian war dead with no known grave. To date, Beechwood has had the honour to be involved in burial ceremonies of identified soldiers Sergeant John Albert Collis on 7 June 2019, and Private G. A. Newburn 12 June 2019. Beechwood is also extremely honoured and proud to continue on in the coming years to work with the Program’s team to hopefully further lay to rest some of those nearly 28,000 Canadian war dead next to their fallen comrades, with a proper name, in the presence of their family and buried by their regiment.

For more information about the Program, including biographies of Collis, Newburn and previously identified soldiers, please visit www.canada.ca/en/ department-national-defence/services/military-history/history-heritage/casualtyidentification-military.html

As well, should you be interested in learning more about the CWGC and what their involvement is visit www.cwgc.org.