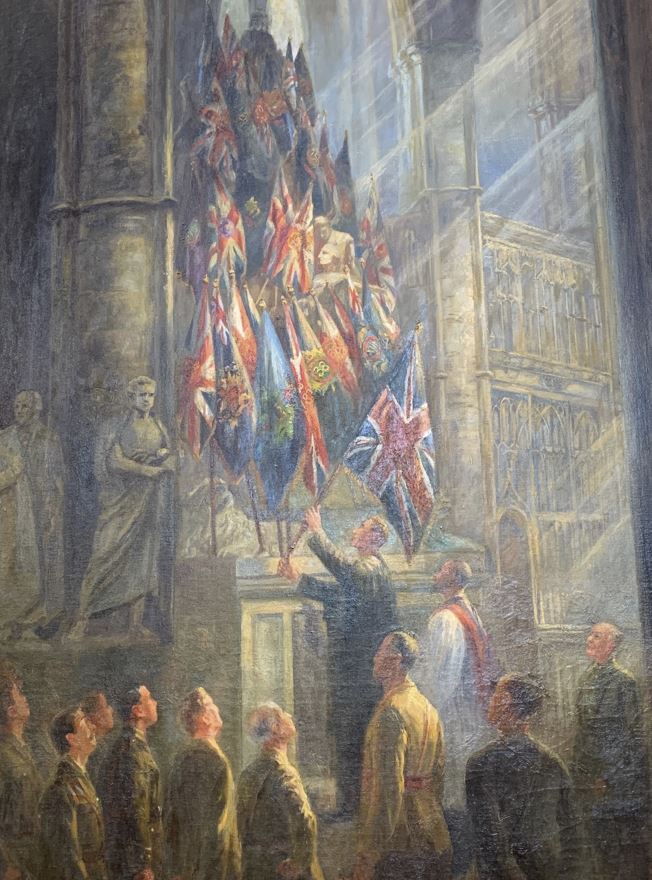 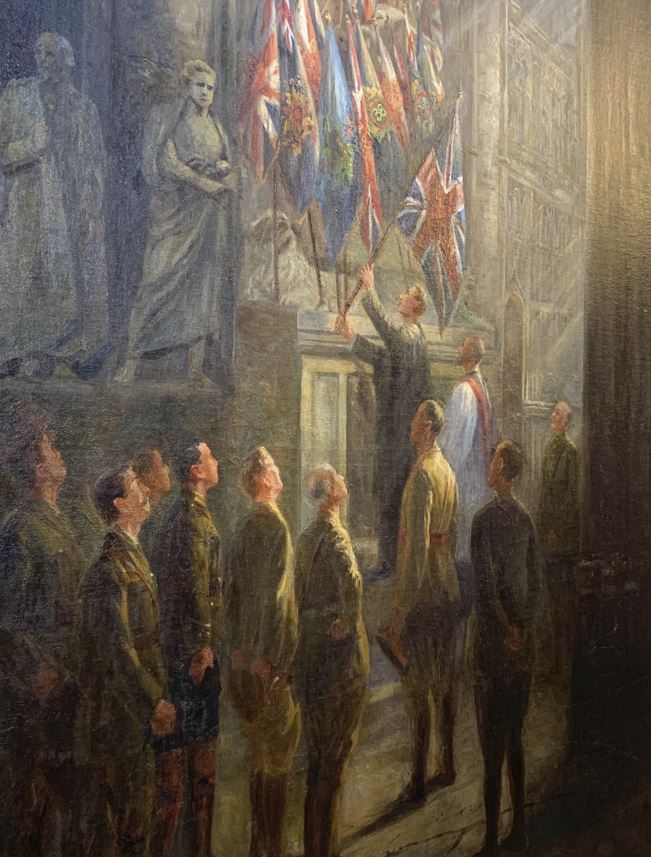 During the 1914–18 war various Canadian battalions deposited their flags (or colours) in the Abbey which were laid up on Wolfe’s monument for the duration of the war and returned after the Armistice. As a perpetual reminder of Canada’s help to the mother country during the Great War two colours were dedicated at a special service in 1922 and placed on Wolfe’s monument where they remain today. The battalions who deposited their colours during the war were: 22nd Battery CFA, 44th Canadian Pioneers, 38th, 51st, 70th, 75th, 77th,116th, 120th, 132nd, 137th, 156th, 157th, 159th, 175th, 187th and 207th.

In 1921 Miss Warren came to Canada to complete two very large canvasses which had been commissioned by Prime Minister Sir Robert Borden* in London during the first World War. Shortly after her arrival in Canada the National Gallery purchased her oil painting “Placing the Canadian Colours on Wolfe’s Monument in Westminster Abbey”, an oil 19” x 37”, which can be seen in the Picture Division - File No. 705-7, Room 12–15 B.I. However the two large canvasses, 6’6” x 11’6”, entitled “Canada’s Tribute” were not purchased by the Canadian government because of a change in the political climate.

hese paintings were finally hung in the Sir Arthur Currie Memorial Hall of the Royal Military College, Kingston, in 1947. At this time Miss Warren received a token payment, though she had spent the best part of three years working on them in Westminster Abbey.

Due to her financial loss for the similar commissioned works that are now at Currie Hall of RMC - Kingston, it is pure speculation, but quite possible, that Warren offered to paint an original for the Battalion with certain variables; colours of the 38th Ottawa Overseas Battalion be placed “font and centre” in the composition of the painting.

This was likely an ingenious selling point by Warren in order to produce various smaller sized paintings similar to the originally commissioned ones. Certainly a way to attempt recovery of the 3 years worth of efforts spent in London. 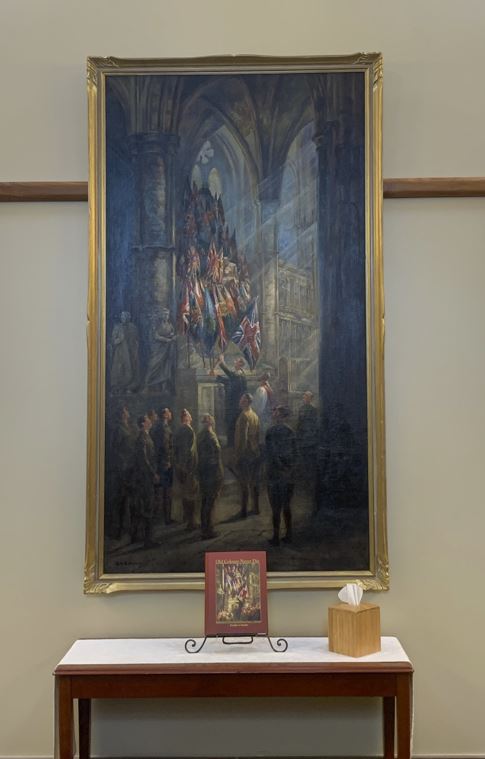 EMILY MARY BIBBENS WARREN (1869 – 1956) was a British Canadian artist and illustrator. She worked in ink, watercolour, oil, gouache, and graphite. Her favourite subjects included gardens, landscape, and in interiors and exteriors of buildings. She is known for paintings depicting sunlight beaming through stained glass windows. Warren was born in Exeter, Devon, in 1869. Her father, Matthew Henry Warren, operated a line of steamships out of Newfoundland. Two of Miss Warren’s sisters were born in Canada.

When she left England she was a member of the following groups: The Royal Society of British Artists, The British Watercolour Society, the Old Dudley Arts Society, the Aberdeen Society of Arts and the Society of Women Artists. She was also active on the Committee for Preservation of Memorials in London. She supported the work of the Deep Sea Mission because of her father’s twenty-five year association with the fish trade tour of Newfoundland.

Finally, as a frequent speaker before Ruskin Societies she instigated a successful movement to have his home, Brantwood, made into a museum. When it became apparent that the argument over the purchase of the paintings, commissioned by Borden, would be a long one, Emily Warren was forced to turn to lecturing to earn a living. She travelled back and forth across Canada delivering lectures illustrated by hand coloured glass slides reproducing her own paintings. About half these 1900 slides are in the in the Thomas Fisher Library, University of Toronto.

She made her headquarters in Ottawa where she held an annual sale of watercolours. Her Canadian work sold well and there was also a demand for her paintings of England and the continent of Europe. This and her need for additions to her slide collections necessitated many painting trips abroad, and she continued to travel until she was 84 years old.

She died at Dunrobin, Ontario, in 1956, at the age of 87. In 1939 the Royal Society of British Artists made her an R.B.A. an honour which is limited to 13 living members. This painting is a true patriotic symbol of Canada’s commitment and sacrifices to the Great War. Apart from depicting a Chaplain laying up the colours, it does not illustrate any other religious symbols, which is important to Beechwood’s neutral multi-denomination and cultural creed.

In recent years Beechwood’s Hall of Colours has become a veritable depot of colours/standards and guidons from various Regiments and Squadrons. The hall is exclusively reserved for Canada’s Veterans and Military Serving Members’ funerals. We invite you to come an see this impressive painting in person, it could have no better home.

We would like to thank the Cameron Highlanders of Ottawa (Duke of Edingburgh’s Own) Regimental Association and the Leadership of Cartier Square Drill Hall for providing this painting on loan to the National Military Cemetery and our Hall of Colours.