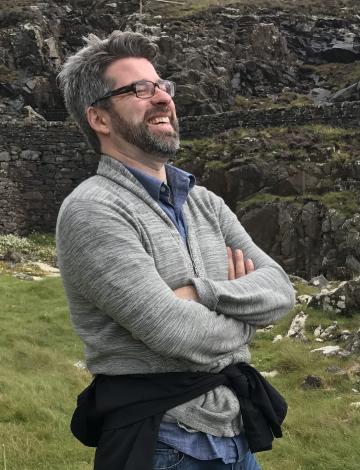 Niko said he had always thought of himself as a lucky guy.

And in most ways, he was.

Born in Vancouver on Christmas Day, Niko’s childhood was spent in many parts of the world. He was very much loved by his parents, Ieva Wool and Peter Fleming, and he was proud to be brother to Danae, Aiscia, Gabe and Silvi.

His itinerant childhood met a deep and abiding natural curiosity. Perhaps this is why he was most at home when he wasn’t at home, whether pursuing some new-to-him knowledge or travelling. One of his few disappointments in a life that was all too brief was that he made it to only five continents.

Niko was a master of numbers and strategy, something many quickly learned after losing to him at cards. These skills were also on display during his career in the public service. The bulk of this was spent at the Department of Finance, a place where his restless mind and wit could get plenty of exercise, and where he was known for his ability to attract and train new talent.

His greatest satisfaction, though, was the life he created with his best friend and wife, Katharine Wright, and their children, Joseph, Leo and Beatrix. Niko loved being a father. He taught them new card games, set up family movie nights, served as dungeon master for a short and extremely loud period, created secret handshakes, and planned vacations around their interests. In a fatherly personal best, he once blew off a bunch of senior military and civilian officials so that he could attend the Grade 1 play. Niko was dedicated to his family. It is they who felt Niko’s love so fiercely, and they who feel the pain of his loss the sharpest.

His understanding of probability did not leave much room for hope when he received his mesothelioma diagnosis. Niko understood how this was likely to end. He was impatient with warrior metaphors. He would be the first to tell you he wasn’t a hero. But he faced his pending mortality with clarity and dignity, and he understood better than most of us that it is its impermanence that gives life meaning.

The family thanks Niko’s extended family, friends, colleagues, community and the doctors and staff with the Ottawa Hospital who supported him since his diagnosis.

Niko believed that we all have the power to make positive change in people’s lives and to build more caring communities. In lieu of flowers, the family would welcome donations in Niko’s name to the Elizabeth Fry or John Howard Societies, to the Shepherds of Good Hope, or to a charity of your choice.

- The wave returns to the ocean -

We send our love and prayers and wish you peace.

Many thoughts and prayers offered for Niko and his family.

My thoughts are with you and your family.

So sorry for your loss. My sincere condolences to all. Xo

Our thoughts and prayers for Niko and the Fleming family. Our hearts goes out to you at this difficult time.

Our deepest condolences and lots of love

Whether on the softball pitch or volleyball court at UofT, as co-author of "Aliens in New York", as co-host at Florence St in Ottawa, or touching base over pizza in the ByWard Market, Niko has always struck me as a truly remarkable person. His wit and humour, his generosity of sprit, and kindness will be a loss to all of us. I know for a fact that he was a person who would literally give you the shirt off his back - it was a multi-coloured striped shirt that I wore for years!

KC, Joe, Leo and Bea, the hearts of our family ache for yours. There are no 'right' words. These days are a blur and challenging. It does provide us at a distance some solace that it sounds like you have good supports around you in Ottawa, but know that the circle is much wider than that.
GB, PB and ALB

Niko will be greatly missed by many! He was my director at Natural Resources Canada and his kindness, laughter and genuine care for people was a blessing for those who had the chance to work with him. His example will always be a guiding light to me on how to lead with openness and authenticity. My deepest condolences on your loss.

Dear Katharine and children, thinking of you and sending much love and caring. I know how much you were cherished, loved and treasured by him and that you are Niko's everything. Sending love, healing, and strength, Kirsty

Dear Katharine and children, thinking of you and sending much love and caring. I know how much you were cherished, loved and treasured by him and that you are Niko's everything. Sending love, healing, and strength, Kirsty