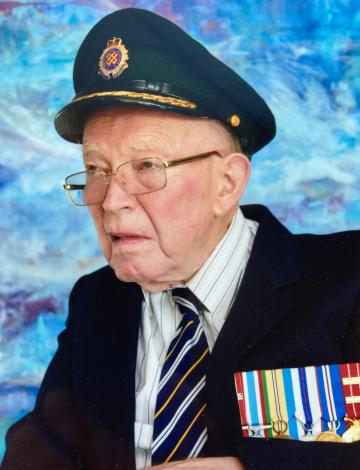 John was born in Saint Thomas, Ontario, but at a young age moved first to northern Quebec and then to the Vancouver area, where his father worked at various jobs including welding in the ship-building yards during World War II, before suffering a serious work-related injury.  Ten-year-old John and his 8-year-old brother Bob then travelled by themselves by train across the country back to Ontario to live with their grandparents, attending school and helping out in their grandfather’s blacksmith shop and gas station.  After two years, the boys then moved back out west to re-join the family on Vancouver Island, first at logging Camp Five and then at Campbell River, where they continued school and contributed by hunting and fishing and working at various jobs, and John played accordion with a local dance band.  John attended UBC, at first thinking he might want to be a teacher, before summer jobs with the Army turned into full-time work and training in logistics at CFB Borden, Ontario.

John’s brief foray into teaching, however, fortuitously took him up to Vernon, BC, where he met Joan, with whom he kept up a two-year correspondence while she finished her own teaching credentials, before they got married and she joined him out east.  There followed numerous postings in Ontario, Quebec, British Columbia, Germany, England, and Belgium, and a peace-keeping tour in Egypt.  John ended his long career with the military at NDHQ at age 66, enjoying some twenty years of retirement in Orleans with his wife Joan, travelling to Europe, Asia, and Africa, and for many years being an active member of Rothwell United Church.  He is survived by Joan, their children Roger, Karen, and Dean, and grandchildren Josh, Ev, Alex, and Julian, as well as by his brother Mike and sister Barbara.

A Graveside Service will be held on Friday, November 26, 2021 beginning at 1p.m.

Guests are asked to please meet at the main entrance of Beechwood National Memorial Centre, 280 Beechwood Avenue, for 12:30pm; please remain in your vehicles as we will be beginning a procession of cars to the National Military Cemetery of the Canadian Forces - Section 103 at Beechwood Cemetery.

The funeral will also be live streamed, please pre-register at the following link: https://foveo.stream/beechwood/John-Joseph-Sharpe-1637949600-33773

I have known John for forty five years beginning as my first company commander in Petawawa with 2 Service Battalion. John was a highly dedicated and proud logistics officer who was a tremendous mentor to many young junior officers. My thoughts and prayers go out to Joan and family. I offer my deepest condolences

We will always remember his sense of humour and his infectious smile. Aunt Joan you and the family are in our thoughts and prayers.

John and I share being from St Thomas, being Logistic Officers and serving together at Camp Shams in 1973-74 and at HDHQ. John was a fine officer and friend and I will miss him.

Uncle John will be missed. I really enjoyed listening to the many stories he told of his youth and adventures abroad. Danie and I are thinking of the Sharpe family and offering our sincerest condolences.

I’m so very sorry for your loss, I think of you often, my heart is always with you, love to you all!! ❤️❤️❤️❤️

One of my most enduring memories of John was during our drive home from our horseback hunt near BC’s Sikanni River. We’d left the packers camp late in the day, loaded our moose meat and headed for Dawson Creek. As darkness fell the cooler temperatures dropped a heavy shroud of fog over the Alaska Highway. As we crawled along in the small hours of the morning John kept our spirits up, laughter going and the driver (me) alert by singing a series of ribald songs (apparently our armed forces know one or two of these) and encouraging my loud participation in the choruses. When fuel finally became short we pulled off the highway at a closed gas station, unrolled our sleeping bags and spent the night. We finished the trip home in bright sunshine.