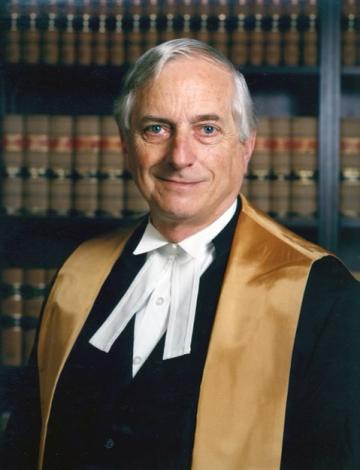 Canadian National Institute of the Blind

Canada has lost one of its outstanding constitutional experts. Barry L. Strayer passed away peacefully at the Montfort Hospital in Ottawa after a lengthy illness.  Among the friends, family and colleagues who mourn the loss of this clever, witty man are his beautiful and supportive wife Eleanor, his daughter Alison (Jean-Philippe Cresceri), his sons Jonathan (Donna Bartolini) and Colin (Tammy Tanner), and his brother Richard in Saskatoon.  He is predeceased by brothers Gordon and Allan.

After a distinguished academic career that included scholarships at Oxford and Harvard, Barry returned to his home province of Saskatchewan to teach, specializing in constitutional law. In 1967 he was invited to Ottawa for a one-year assignment to help revise the constitution. That one year extended to 15 years during which time Barry played an instrumental role in establishing the legal framework for the patriation of the Constitution of Canada, and was one of the principal writers of the Canadian Charter of Rights and Freedoms. He worked alongside Prime Minister Trudeau through to 1982 when the constitution was finally patriated and the Charter adopted into law.

Throughout his professional life Barry was engaged in constitutional and public law issues and wrote on public law subjects.  He had three books published: Judicial Review of Legislation in Canada, The Canadian Constitution and the Courts, and Canada’s Constitutional Revolution.  In 2008 he was named an Officer Of the Order of Canada, the citation referring to him as a “renowned expert in constitutional law”.

Barry was also called upon for his expertise outside Canada: he drafted a constitution for the Republic of the Seychelles to restore constitutional government after a coup d’etat; advised the Government of Hong Kong on the drafting and adoption of a Bill of Rights in preparation for the transfer of sovereignty to the People’s Republic of China; and assisted the Canadian Bar Association in helping the Nepal Bar Association in the writing of a new constitution.

He enjoyed summers of golfing and sailing at the cottage on the Gatineau River, especially in the company of family and friends. He had an abiding interest in India, where he traveled several times after an early formative voyage on a World University Service seminar in 1953. His greatest recreation was reading, mainly non-fiction works of history and biography. Like Eleanor, he had a love of language and a knack for recitation with a varied repertoire.

A memorial service will be held at Beechwood Cemetery Monday Dec. 12, 2022 at 1:30 p.m. Donations in Barry’s memory to the Canadian National Institute of the Blind, the Alzheimer Society of Canada or a charity of your choice would be appreciated.

The family wishes to thank the staff and care team at the Rockcliffe Retirement Residence, the medical team at the Montfort hospital and Dr. Heather Galbraith for the exceptional care and comfort they provided Barry in the past months.

Thinking of you. This is a beautiful obit for Barry

Dear Alison and family. I am thinking of you also and my heart goes out to you. Your father’s life sounds so accomplished and well lived.

Eleanor and family. You in my thoughts and prayers. Barry was my oldest long time friend. I shall miss him. God bless. Vern

I curled for several decades with Barry in the Saskatchewan Mafia Curling Association at the Lansdowne and then Granite Curling Club on Sunday morning. He was a lovely, kind, thoughtful person with a lovely sense of humour.

Barry was a frighteningly brilliant legal mind, but also as grounded as a Saskatchewan farm boy would be. He will be sorely missed and well remembered.

Barry made an enormous contribution to the work of the Federal Courts. He will be remembered as one of the very best who had the privilege to sit on these courts. Our deepest sympathies to Eleanor and family,

Barry was a great colleague on the court of appeal and an outstanding person in all respects. I always enjoyed his company for his wit and intelligence. He was always able to separate politics and law in his perceptive judgments. No doubt the Supreme Court would have been a better place had he been, and should have been, appointed to it.

I’ve no smart words, just the very deepest sympathy for you, your brothers and your wonderful mum. Your dad was a very special man and will be missed forever by all who loved him x