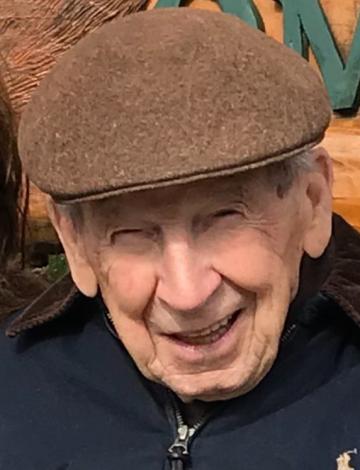 Click below to make a donation on behalf of Germain H. Aubut

Due to government-imposed restrictions related to COVID-19, attendance will be restricted to a limited number of individuals, personally invited by the family. However, you are welcome to attend the service through a livestream broadcast, by registering your self by clicking here: https://foveo.stream/beechwood/germain-h-aubut

Germain “Gerry” Aubut passed away peacefully at the Montfort Hospital in Ottawa on Sunday, January 16, 2022, at the age of 99.

He was the beloved husband of Iris (Miller) since 1988. Previously he was married to Florence Roussel (1926–1984). Father to Jacques (Louise Séguin) and Céline (Dean Buzza) as well as Grand-papa to Shanna and Danika Buzza and Catherine and Mélanie Aubut.

He was warm, gregarious, generous, welcoming, polite and refined, a man of responsibility and duty. A true gentleman, he carried himself with dignity, pride and with a fine sense of style. It is little wonder that this handsome man attracted the attention of two striking women during the span of his adult life.

In 1951 he married the beautiful and personable Florence Roussel of Edmundston, N.B. They had a thirty-two-year love affair until her passing in 1984. Together they lovingly raised their two children and created a wonderful and welcoming family home in Ottawa.

Predeceased by his older siblings, Lionel, Simone, Gérard, Georgette, Juliette, Noëlla and Blanche, he is survived by his sisters, Freda Rossignol of New Britain, Conn. and Germaine Baxter in Atlanta, Georgia and many nieces and nephews.

Born on a homesteading farm in the community of St Martin, New Brunswick, life was not easy, and work was plentiful for parents Alfred and Robertine, and their ten children. Everyone had their job to do, but the tight bonds of an energetic family shaped his character and turned him into a natural leader and problem solver.

His adolescence in Edmundston, New Brunswick brought contrast from the rural life as he finished high school and then answered the call for service into the Canadian Army. It was wartime and he subsequently spent 1943 to 1946 at the Canadian Military Headquarters at Canada House in London. It was a cultural awakening that influenced the rest of his life, and cutting a rug in the dance halls wasn’t that bad either.

When the war ended in 1945, he joined in riotous crowds in front of Buckingham Palace to celebrate the victory. Decades later he and Iris discovered they had attended the same celebration.

Taking advantage of the Government’s tuition scheme for ex-servicemen, he attended Memramcook College (now the Université de Moncton) and graduated with a Bachelor of Commerce. He paid that opportunity forward and helped many family members with their post-secondary education, and created a bursary at his alma mater.

Freshly graduated, he accepted a job in the federal public service as an auditor for National Defence. He was later hand-picked by then Health Minister Marc Lalonde during the first Trudeau government, to be the Director charged with creating and implementing a new Canada-wide initiative: the New Horizons Program. Designed to engage seniors in their own community and contribute their life experience, it was, and still is a resounding success.

After his retirement he brought his expertise in the area of seniors and became involved with the Council on Aging of Ottawa, serving as its president from 1991 to 1993. The Council awarded him the Margaret Griffiths Award in 1998 recognizing his immense contributions to the betterment of the quality of life of seniors in Ottawa. He was extremely proud of that award and made sure everyone saw the write-up and the very large and very good photo of him in the newspaper.

But life was not just about work, he enjoyed tinkering and was always saving any loose screw, or nail or nut to use in his projects. In the summers he had a large garden and was happy to show everyone how well everything was growing. A fresh cucumber or tomato plucked from the vine with a little bit of salt was one of his favourite meals. He was an avid construction site watcher, and was more than willing to give advice on any work that was being done, whether he knew what he was talking about or not.

In writing this, many small moments come to mind that encapsulate the Germain his family knew, whether it be him trying to steal food from your plate and chuckling if you told him not to. Telling jokes or funny stories and never quite getting to the punchline because he’s laughing already.  Treating any walk as an opportunity to look for coins and four-leaf clovers, distractedly playing with the change in his pocket during Sunday Mass, or keeping the unopened pats of butter from Swiss Chalet.

He was the loving, congenial and inspirational patriarch to the large Aubut clan. A model to them and their children, the next generation, regaling all with stories and life lessons at the almost weekly brunch gatherings. Germain loved all and he was well loved.

He will be greatly missed.

A Memorial Service will be held on Wednesday January 26, 2022, at 1 p.m. in the Sacred Space of Beechwood. Due to government-imposed restrictions related to COVID-19, attendance will be restricted to a limited number of individuals, personally invited by the family. However, you are welcome to attend the service through a livestream broadcast, by registering your self by clicking here: https://foveo.stream/beechwood/germain-h-aubut

To Iris and the Aubut family my deepest condolences. We will remember Germain as one of the nicest neighbours while he and Iris were living at Riverside Gate. He will surely be missed.

Celine and Dean and family please accept our deepest sympathy for your loss. We were so sorry to hear of the passing of your Father Celine. Our thoughts and prayers are with you. Don and Lynne

Our heartfelt condolences on the loss of your father Celine & Dean. We hope you draw comfort from all the happy times enjoyed and family memories created together over a rich lifetime. Celebrate a life well lived as you honour his memory. Sending big hugs. ?

We would like to express our sincere condolences to Iris and the Aubut and Nadeau family.

We have such fond memories of our pleasant neighbour at Rivergate Way. Germain and Iris were always welcoming. We send our deepest condolences.

Dear Iris......sending you big hugs from Cape Breton. I always looked forward to my trips to Ottawa because I knew I would see you both. Germain’s smile always made me smile...I remember telling him about Dave whom I had just started dating....and he thought I should “go for it”. Which happily I did. I am so pleased that you found each other. May your memories be sweet. In sympathy, Mary Munson