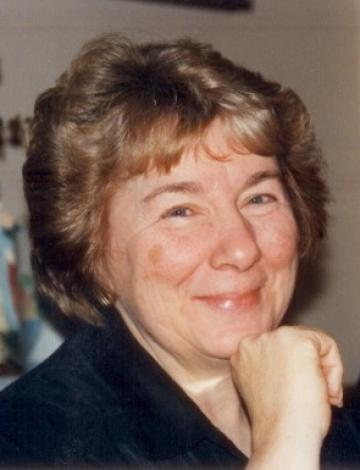 donations to The Dementia Society of Ottawa and Renfrew

donations to The Ottawa Mission

A proud Newfoundlander, and well known for her mischievous smile, twinkling eyes and sense of humour, Dot was born in Milltown, Bay D’Espoir to Gladys and Jerry Strickland. Growing up with six siblings - Ernie, Murray, Ada, Marie, Bert and Brian - there was no shortage of trouble to get into. She could often be found hopping ice floes on the bay, hiding from her mother by crawling up under the house, joining in on Mummering activities at Christmastime or playing the guitar at a good kitchen party. Church was at the centre of the community, and Dot was playing the organ for church services by the time she was 10. Her gift for music stayed with her for life, and even during the later stages of her illness, she would still react when she heard Newfoundland music. She did always love a good jig.

At age 18, Dorothy entered nurses training at the General Hospital in St. John’s, and eventually ended up working at the hospital in Stephenville, NL. Through her sister Ada, she met a young RCMP officer from Nova Scotia named Bob Barrass, who was stationed in Stephenville. They were married on September 19, 1970 and moved to Ottawa a few months later, settling in Manotick. In 1973, she gave birth to Christine, followed in short order by Andrea in 1975, and then the “oops” baby Susan in 1978. Dot’s greatest joy in life was being a mother, and she excelled at it. Her brood all have memories of toddling along behind her at the mall, picking strawberries at Patterson’s Berry Farm, spending many summer days at the RCMP summer camp in Manotick, and in later years, following her from slot machine to slot machine at the casino. Dot is also fondly remembered by her daughters for her many hijinx, including a love of hiding under their beds or in their closets, waiting patiently until they went to bed so she could grab their ankles or pop out and scare them.

Returning to work once her girls were older, Dot resumed her long and successful nursing career, eventually as Director of Care at Central Park Lodge. An exceptionally kind, devoted and compassionate person, Dorothy was beloved by the residents, their families and her coworkers.

Dot’s three grandchildren were a highlight in her life. She devoted her later years to Jackie, Ben and Audrey, and was deeply involved in their lives, giving them the same attention, care and love of the absurd that she bestowed on her own children. One of their favourite memories is sleepovers with Grams, where they would be spoiled rotten with trips to McDonald’s, watching Polar Express for the umpteenth time, and limitless cuddles. In their words - “She made the best oatmeal”.

A special thanks goes out to the incredible staff of Rideau Village at Carleton Lodge, and to those friends who saw Dot through the last few years with regular visits and care, including Patsy, her best friend and partner in crime; Linda G. and Faye; and Linda H. Dot also leaves behind many nieces, nephews, cousins (especially Jane) and extended family members who all have fond memories of her kind, generous and playful spirit.

A celebration of life will be held on June 11th at Beechwood Cemetery from 5-8 pm. In lieu of flowers, donations may be made to The Dementia Society of Ottawa and Renfrew or The Ottawa Mission, a place that Dorothy held close to her heart and where she volunteered after her retirement. Condolences and sharing of memories can be done at www.beechwoodottawa.ca.

Our hearts go out to families and friends who have to watch their loved ones battle this disease.

Our heartfelt condolences to Bob and family.

Bob, our prayers and thoughts are with you and your family at this time. Having married an RN and Newfoundlander also, I know what a great lady Dorothy was. God Bless.

Sad to learn of your great loss Bob. May the words of support that you receive help you as deal with your grief. Sincerely, Bill Bauer

We will miss our dear friend deeply. May you rest in peace sweet one. Till we meet again.

On behalf of the General Hospital School of Nursing Alumni, I wish to express deepest sympathy to Dorothy’s family at her recent passing. Dorothy will be remembered at this year’s annual Alumni dinner during the roll call and moment of silence for deceased Alumni members. Also her name will be recorded in the Memorial Book for deceased graduates. Sincerely, Jeanette Walsh on behalf of Robert Meadus, President, General Hospital School of Nursing Alumni

On behalf of Dorothy(Dot’s) classmates, I want to express, to her family, our deep sorrow at her recent passing. Dot will be remembered as being quiet but someone who always had a smile and loved a laugh. We were aware she had not been well in recent years but she was always remembered at times when her classmates were together. Please know that you are all in our thoughts and prayers. Sincerely, Class ‘65

To Bob and family, our deepest sympathy.

Bob; I am so very sorry to learn of Dot's passing. Please accept my sincere condolences to you and your family. I have many fond memories of our close friendship with you and Dot and the many good times we shared together. Take care buddy, Walter.

Deepest sympathy to Bob and family. Dot was a nursing classmate and a dear friend. Rest In Peace.

I am so sorry for your loss Sue and family. You all are in my prayers