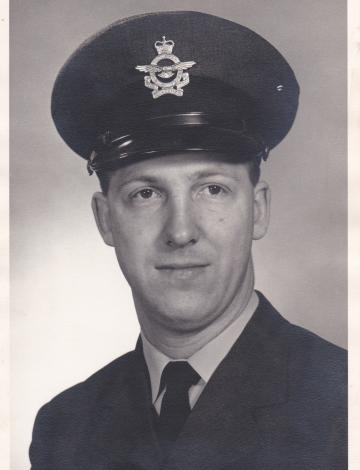 Click below to make a donation on behalf of Allan D. MacDonald

It is with great sadness that the family of Allan Douglas MacDonald announces his passing after a brief but valiant battle with cancer, at the age of 90 at his home in Ottawa, on December 8, 2022.

Born on May 11, 1932 in Plaster Rock, NB, he was one of eleven children of the late John and Basheba (MacInnes) MacDonald.

Besides his parents, he is predeceased by his brothers, Arnold, Gerald, Ronald, John, James, Kenneth, Malcolm, Donald MacDonald, and his sisters Jean Haines (Albert) and Mabel Jenkins (Henry).

Allan enrolled in the RCAF in 1949, serving 34 years. In 1952, he was posted to France. Subsequently, posted to England, Edmonton, Ottawa. He completed a UN mission in El-Arish Egypt, then transferred to Halifax, and Greenwood. He finished his career with the rank of Master Warrant Officer in Ottawa. After his retirement from the Armed Forces, he went on to serve as a civilian for DND for 12 years.

He was a member of the Royal Canadian legion, volunteering his time with the Orleans Branch #632.

Dad was always there for everyone, family, neighbours, colleagues, or friends. He is fondly remembered by his children for their summer trips teaching us to fish on the Tobique River in Plaster Rock, NB, his hobby of birdwatching, and for being an enthusiastic coach of all of their sports teams.

We are forever grateful for his love and support and a beautiful example of a selfless human being.

Lindsay, Shane, Terry and the entire MacDonald family, please accept our deepest condolences. We are keeping you in our thoughts at this great time of loss.

Offering my heartfelt sympathy to Michele, Leighton and sons as well as the entire MacDonald family. You are in my thoughts at this sad time. I hope you find some peace in all the good memories you shared.