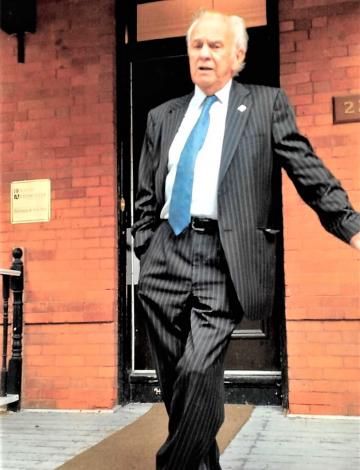 Distinguished lawyer to thousands of clients and generations of families. Client appreciation was his priority for the human problem behind the legal needs. Transforming legalese into client-ease was the hallmark of his career.

A graveside service will be held at National Military Cemetery at Beechwood, Ottawa. on Tuesday January 18th at 1:00 p.m.

I first started working for Donald Grant as a legal assistant in early 2008 and found that he had a wealth of experience, knowledge and compassion for everyone. It was my honour and privilege to work for him until his retirement from practicing law. He will be missed.

Donald Grant, Don for friends, was highly philantropist and I considered myself privileged to have known him. He had done a lot for me, professionally and personally. I have just lost a great friend. Rest in peace

We go back to his days teaching at Gloucester High School in the mid 60s.. Years later he became our International Postal Hockey Tournaments legal council and he guided us to true successes across Canada, the US and Europe. Always a friend. Always ready to help. Always ready for a good story. What a pleasure to say that we knew him. What a guiding light he was for us. My sincerest condolences to Don's families. A very respected man. None finer.

David and I were lucky to know Don, to be friends with him, to have his wide counsel and advice, to appreciate his kindness and generosity and to admire his joy and optimism. Deepest condolences to the sons and grandchildren her adored and to Julius, his forever partner.

Don was a very special person to me and taught me many lessons in life. He was kind and generous with his time. He loved his family and grandsons. I loved his sense of humour and his sense of fashion. I will miss him. Rest in peace Don

Don was one of the kindest, caring people I ever met. He was so good to me when I needed advice. He loved to discuss politics and tell wonderful stories of the many politicians he spent time with over the years. More importantly, he loved his family and told everyone how much he especially enjoyed spending time with his Grandsons. Thank you Don for all you have done for so many people. I will never forget your kindness. My deepest sympathies to his family.

I had the distinct honour and privilege of articling with Mr. Grant & Julius in 1996. Mr. Grant was a people person through and through. He took me along to countless Will signings, in client homes, where Iearned so much from him about the human connection in client relations. He had patience and a genuine interest in people, their families, their troubles and triumphs, and I so enjoyed the fiery dragon he could become when the situation called for it. 25 years after my call to the bar, Mr. Grant was still "Mr. Grant" to me. My sincere condolences to his family and loved ones.

Worked with Don on many political campaigns and community events. Always prepared to help, always in good humour and had a wealth of experience and wise advice. My sincerest condolences to his family and partner.

don on many political campaigns and community events. Always good humored, always prepared to help and had a wealth of experience and knowledge. My sincerest condolences to his family and partner.

I will miss Donald Grant. I knew him over 40 years and his wit, charm and sensibility will remain fond memories.With his early support and advice to myself as a young articling student or later as a trusted confidant -his door was always open.
My sincere condolences to Julius and the family.