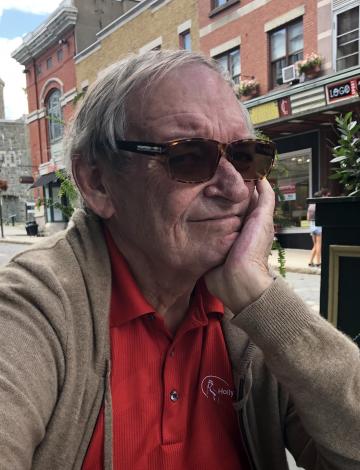 It is with profound sadness that we announce the peaceful death of André Massé on November 23 at his home in Ottawa. He was surrounded by members of his immediate family.

Predeceased by his parents Jeanne Soublière and Emmanuel Massé, André leaves behind his beloved wife of 31 years, Patti Robson, his son Yani, his daughter Jasmine, his grandchildren Simon and Gabriel and their mother (Marie-Ève Turgeon). He is predeceased by his brothers Raymond and Guy (Diane Desrosiers), and survived by his sisters Francine (Pierre Montpetit), Diane (Jean-Claude Paquette, predeceased), and Hélène (Pierre Lamarche), as well as his brothers Yves (Marlyne Perrin), Louis, and Gilles (Camille St-Éloi), his nephews and nieces, Jeannine Grégoire (mother to Yani), other extended family and many friends.

André graduated from the University of Sherbrooke in 1965 and University of Ottawa in 1967. In 1968, while completing his post-graduate studies in political science at the University of Ottawa, André joined the Office of the Rt. Hon. Pierre Elliott Trudeau, Prime Minister of Canada, as an Advisor for Québec. In 1971, he became the Deputy Press Secretary to the Prime Minister and, in 1973, Director of the International Media Centre for the Commonwealth Heads of Government meeting in Ottawa. He was subsequently appointed as Canada’s Consul in New York in 1973, as Head of Public Affairs.

In 1978, he became the Director of Public Affairs for Alcan Aluminium Limited in the Saguenay—Lac-Saint-Jean and, in 1982, Director of Communications for Alcan Smelters and Chemicals Limited.

In 1984, he founded Massé Communications Inc. in a close collaboration with his wife Patti. Together they built a successful public affairs consulting practice headquartered in Montréal. Among its clients, Massé Communications Inc. worked with several multinational firms including Alcan, Kraft, Michelin, Hyundai and several prominent Canadian and Québec organizations including the Bronfman Foundation, the Dairy Bureau of Canada, the Pierre Elliott Trudeau Foundation, Pharmaprix and the Department of Canadian Heritage.

From 2002 to 2010, André served as a senior consultant in communications and translation, working with, among others, Natural Resources Canada, Canada Post, and Rio Tinto Alcan.

André leaves a lasting legacy as a humanist, a brilliant intellectual, and as an indefatigable fighter who turned to politics to try to improve the lives of his fellow citizens. A passionate and deeply knowledgeable follower of Canadian, American and international politics, he had a reasoned but concerned perspective on our collective future – a future he hoped would be ever more just, generous and inclusive.

André’s ashes will be interred at 11:30am on Saturday, November 27 at the Notre-Dame Cemetery in Gatineau. In lieu of flowers, a donation to the charity of your choice would be appreciated.

Our deepest sympathies to Patti, Jasmine and Yani.
May he rest in peace.

Devoted to public service,Andre was wise about politics and even wiser about how to live a good life.He will be missed by all those lucky enough to know him.

Our deepest sympathies and condolences to Patti. We are honored to have known such a remarkable human being

My brother-in-law and friend André was a true renaissance man, one of the brightest, most creative, kind and compassionate human beings I have ever known. He was also a good friend, always willing to help or give of himself to others, including my three children and me. André will be sadly missed by all whose lives he touched like ours. Sincere condolences to Patti, Jasmin, Yani and the whole Massé family.

My sympathy, condolences and warmest thoughts to you all.

My heart is with you, Patti and Jasmine, and your entire family.
Angels will rejoice in heavenly melodies for the husband and father you lost.
May light and peace be with him, forever more.

Patti, our deepest sympathy and condolence to you and the family

Our condolences to Patti and family. May he Rest In Peace in Haven. We are thinking of you during this difficult time.

Patti, our deepest condolences, it was our pleasure to call him our friend, he will be missed.