If this is not a genocide, then what is it? - Indigenous residential school students honoured at Beechwood Cemetery 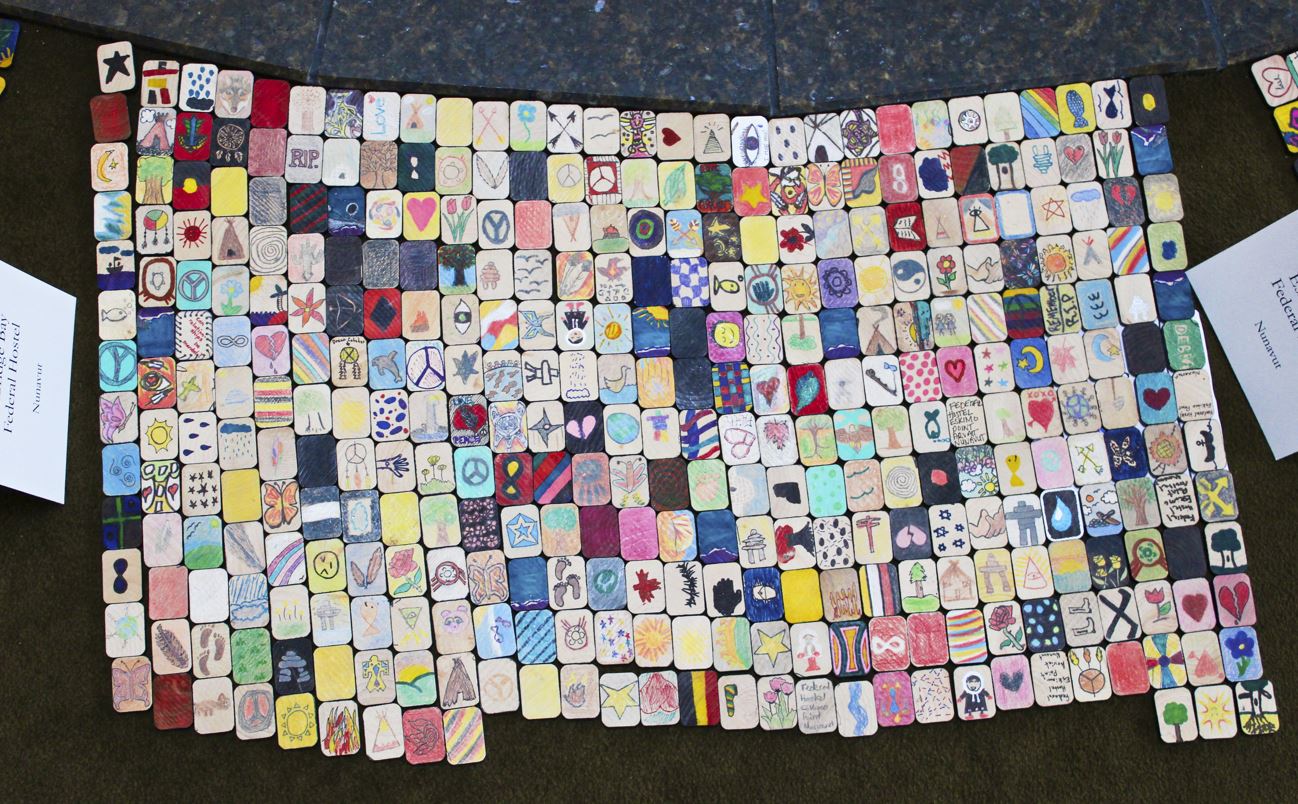 If this is not a genocide, then what is it? - Indigenous residential school students honoured at Beechwood Cemetery

The 57,000 children estimated to have died at Canada’s Indian residential schools were symbolically reunited for the first time on Wednesday — the eve of the first National Day for Truth and Reconciliation, also known as Orange Shirt Day — at Beechwood Cemetery, as hand-painted wooden tiles, one for each child, were assembled into a single, large memory labyrinth.

The tiles, each measuring 1”x1-3/8”, were painted, mostly by school children across Canada, as part of an initiative called Project of Heart, with words and images both hopeful and despairing.

“Hope,” “love” and “happiness” read a few, while others depicted Indigenous art, shooting stars, trees, hearts, a teddy bear and the like. Still others represented the damage and hurt caused by this country’s residential school program: a child behind bars, for example, teardrops, broken hearts and railway tracks.

And as volunteers from the Ottawa-based, youth-run Assembly of Seven Generations (A7G) joined the tiles to form a labyrinth in Beechwood’s sacred space on Wednesday, a larger, and dark, inheritance also took shape.

“Each one of the so-called schools is being represented,” said organizer Sylvia Smith, “and within each school there is this much death. There were whole communities without children.

“If this isn’t a genocide, then what is it?”

Now retired from teaching, Smith taught at Elizabeth Wyn Wood Secondary Alternate School in Ottawa, where in 2006 and ’07, she and her Grade 10 history students began Project of Heart, after Smith explained the legacy of residential schools beyond the 63 words provided in their textbook.

From there, Smith says, the students largely took over, in what became a five-part program to learn more about First Nations, their resilience and accomplishments, and honour the children who died in the schools. The project expanded to thousands of other schools in Canada and abroad, as well as other groups, such as seniors organizations, women’s shelters and book clubs. Each school, Smith says, was limited in the number of tiles it could paint to between 23 and 75 per cent of its student population, equal to the estimated range of death rates among residential school students.

In 2011, Smith was awarded a Governor General’s Award for her work with the project.

“The apologists for Indian residential schools really need to see something like this,” said Smith. “When you see this all in one place, it suddenly becomes palpable, and so much easier to understand how horrid that we would ever, ever tell an Indigenous person to just move on or get over it. How can you?”

While the tile labyrinth may be an abstraction, Gabrielle Fayant, co-founder of A7G, said it carries a profound personal meaning. “It reflects on the truth of this country. I think of my relatives — I come from about four generations of residential school, industrial school, day school, convent survivors, and that still impacts my family very deeply to this day.”

Azia Seitcher, a member of the Nuu-Chah-Nulth First Nation from Vancouver Island, was among the A7G volunteers laying out tiles on Wednesday. She has family members who died at residential schools, and others who survived at great cost.

“I’ve always been a strong advocate for awareness around that, and I’m hopeful that people are finally starting to put a lot more knowledge out there for non-Indigenous people to know, too.

“Today,” she added, “I’m thinking about my grandparents, who were in a residential school, and about my mom who was part of the Sixties Scoop, and how these things, that trauma, still affects us today, and how I’m grateful I am to live in a good home and still be connected to my culture.”

Represented in the mosaic at Beechwood are 143 Indian residential schools, from Shubenacadie, N.S. to Kitimat, B.C. and Fort Resolution, NWT.

Cindy Blackstock, executive director of the First Nations Child and Family Caring Society of Canada, who actively participated in Project of Heart by visiting schools to speak with students, said activities like those at Beechwood are important in reconstructing Canada’s whitewashed history. “It’s important that Canadians are trusted with the truth.

“When I walked into those classrooms and saw teachers who trusted their students enough to share with them what happened at residential schools — I was wondering whether even that would happen in my lifetime. So many school boards and politicians are so resistant to trusting kids with the truth, but they can handle it. They understand it and want to learn from it to make life better.

“So no, I didn’t anticipate being here today, but it’s good news that we are.”

On Wednesday night, meanwhile, residential school survivors and other First Nations members were invited to walk through the labyrinth, while Beechwood expects a capacity crowd of more than 1,500 people to take part in its National Day for Truth and Reconciliation activities on Thursday, which include the tiles, a historic reconciliation tour of the cemetery, a short film screening and book readings.

According to Beechwood’s Nick McCarthy, as much as possible of Thursday’s events are being documented, so those unable to attend will nonetheless be able to take part.

“We want to share this with as many people as possible, so the Caring Society has put their movies online for the next three days, the books are online, and Beechwood is going to try to get the walk-through video of the tiles online (Thursday) or Friday.

“The importance of this is the scale,” he added, “because I don’t think Canadians understand the impact, which goes back seven generations and beyond. We’re hoping that people have a chance on the first-ever Truth and Reconciliation Day to reflect on the impact of government policy against Indigenous folk, and to think of the generations we’ve lost.”

After being displayed at Beechwood, the tiles will be shipped to Algoma University in Sault Ste. Marie for as-yet-unspecified purposes.