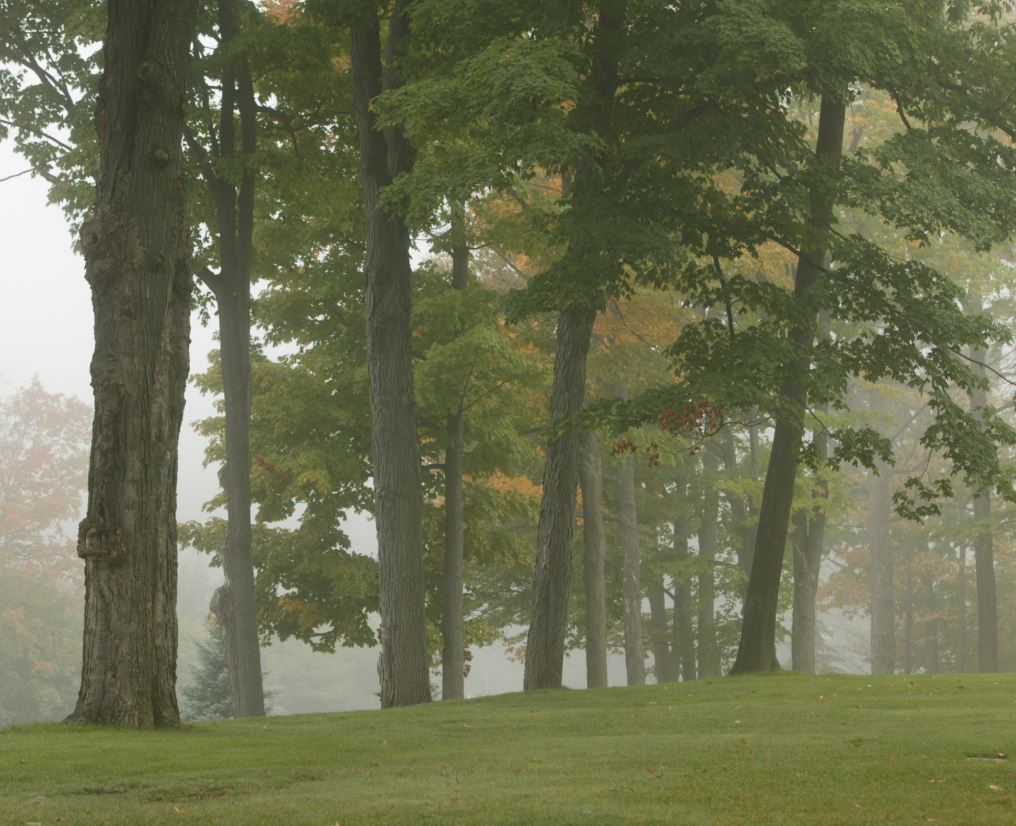 The LDD moth can be an annoying pest in residential, urban and rural areas as well as natural forests. The LDD Moth has been slowly spreading across the U.S. and Canada. This foliage-feeding insect, which is native to Europe, was introduced into Massachusetts in 1869 by a misguided naturalist.

LDD moth caterpillars, the immature “larval” stage, feed on the leaves of more than 300 species of trees. They especially like oaks, but many other trees are also good hosts. During an outbreak, the density of LDD moth caterpillars can be so high that many host trees are heavily or even completely defoliated. The abundance of large, hairy caterpillars and the resulting rain of frass (fecal pellets) from infested trees are unpleasant and can be distressing, especially for people who have not experienced a LDD moth outbreak before.

Here are frequently asked questions and answers that nearby residents might ask during LDD moth outbreaks.

How do I know if I have LDD moth feeding on my trees?

Many insects will feed on tree leaves, but there is only one LDD moth. LDD moth caterpillars have pairs of red and blue spots along the back and long, dark hairs. They feed on leaves of oaks and other preferred host trees including aspen, apple, basswood, birch, crabapple, willow and many other types of trees in early and mid-summer, usually from mid- or late May until early July. 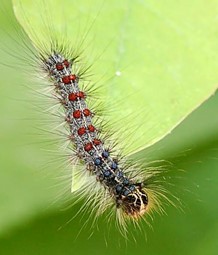 LDD moth caterpillars spin reddish brown cocoons in late June or July. Over the next few weeks, the caterpillars develop into moths, a process called pupation. Many other insects feed on oak trees and are sometimes mistaken for LDD moth. 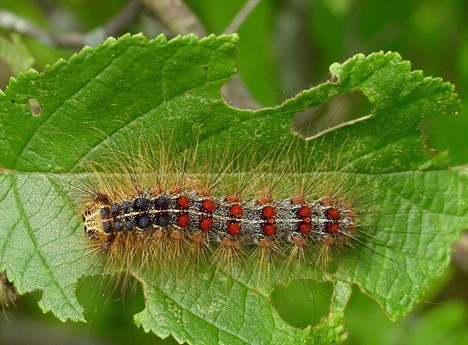 Adult moths emerge from cocoons, usually in July or early August. The moths live only a few days and do not feed. Adult males are brown with dark markings on the wings and are active fliers. Adult females have white wings with black chevron markings, but do not fly. Each female lays one tan egg mass, which she covers with a dense mat of tiny hairs from her body. Egg masses may be small, about the size of a quarter, or up to 3 inches long. Egg masses are laid in July or August, overwinter and hatch the following April or May. 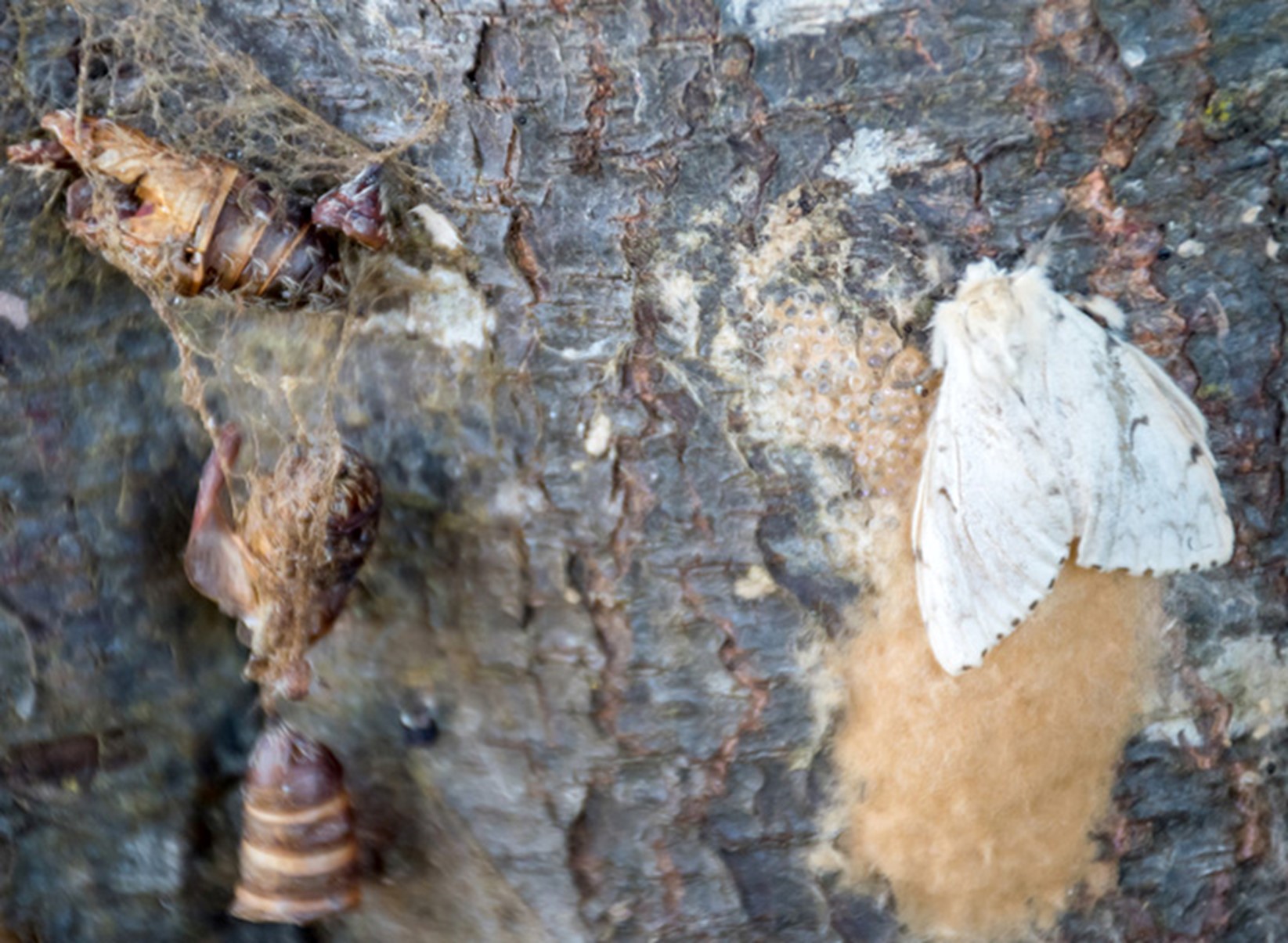 Has LDD Moth killed my tree?

An oak or other hardwood tree that is completely defoliated by LDD moth caterpillars may look as if it's dead. However, most of these trees will “re-flush” and produce a second set of leaf buds, usually by late July. This second set of leaves will provide enough energy for the tree to survive winter. Severe defoliation does stress the tree, but trees can usually tolerate even complete defoliation for a few years. If trees are affected by other stress factors such as severe drought, disease or poor growing conditions, there is a greater chance severe defoliation will lead to mortality.

LDD moth caterpillars seldom feed on conifers unless populations are high and most of the leaves on oaks and other preferred hosts have already been consumed.

Does the LDD Moth have any natural predator?

Many natural enemies including mice, some birds and predatory insects feed on LDD moths at various life stages. Several insect parasitoids, which are highly specialized types of wasps or fly species, attack LDD moth eggs, caterpillars or pupae. You can encourage these natural enemies by avoiding the use of broad-spectrum insecticides and providing habitat for birds and predators.

Will I have to deal with LDD Moth next year?

LDD moth populations typically remain high for two to three years then collapse and return to low levels. This population collapse usually is the result of a virus disease called NPV that affects LDD moth caterpillars. When populations are high, the caterpillars compete with one another for food and resting spots. Stressed caterpillars become more susceptible to the NPV disease.

After a year or two of heavy defoliation, the NPV disease, in combination with a fungal disease and other natural enemies, will generally control the outbreak. LDD moth populations usually remain at low levels for five to 10 years and sometimes longer.

Can't we just get rid of ALL the LDD Moths?

Nope. LDD moth is here to stay and is a part of the urban forest ecosystems. LDD moth females like to lay their egg masses in dark, protected locations such as the underside of lawn chairs or picnic tables or on firewood. Egg masses may also be found on recreational vehicles or trailers or in the wheel wells of cars.

Accidentally transporting egg masses to a new location can result in a new LDD moth population that will cause headaches for other people. Be sure you know what a LDD moth egg mass looks like. Inspect firewood, vehicles, lawn furniture and other outdoor items that might have egg masses before moving them out of province. If you find egg masses, scrape them off into a bucket of soapy water or bury them.

Natural predators and pathogens are the main reason the LDD moth outbreak in North America is collapsing.

An invasive forest defoliating insect found in Ontario that is now naturalized. Recent observations and surveys in the Ottawa area indicate its populations are increasing.

The City of Ottawa is carefully monitoring the situation, but does expect some defoliation to occur within the outbreak areas. The outbreak is expected to last two to three years.

What is the City doing about it?

The City of Ottawa is conducting LDD moth surveys which started in February 2021 throughout the urban and rural area to determine the extent of the outbreak. We have communicated with other partners, such as the Ontario Ministry of Natural Resources and Forestry, and they report to be monitoring the issue with increased populations of this insect in other areas of the province. City staff continue to monitor this issue and will communicate to residents about LDD moth status in Ottawa and about best practices for residents to consider for control.

Residents may see large groups of caterpillars on tree trunks and branches and some loss of leaves (defoliation) on trees this spring as a result of this insect. Healthy trees are able to sustain loss of leaves and some trees will produce a second flush of leaves in the same season following leaf loss. It is only repeated years of caterpillar feeding that cause concern with tree health.

What residents can do?

On their properties, residents can consider the following to reduce tree damage:

What Beechwood Cemetery is doing?

Beechwood Cemetery is home to approximately 6000 trees and the scope of dealing with the LDD Moth is enormous.

Starting in August Beechwood will commit as much of its labour resource, as can be spared, to begin the process of removing egg masses from its property.