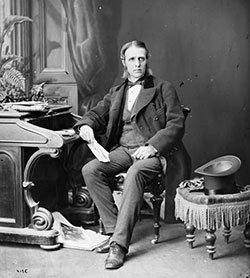 Born in Toronto on January 5, 1822, McDougall attended Victoria College in Cobourg, Upper Canada. He began practising law in 1847, and in 1862 was called to the Upper Canada Bar.

He was elected as a member of the legislative assembly in 1858, and served as Commissioner of Crown Lands and Provincial Secretary. He attended all three Confederation Conferences, and then served as Minister of Public Works in the Macdonald government. During his time as Minister of Public Works, McDougall introduced the resolution that led to the purchase of Rupert’s Land.

McDougall was appointed Lieutenant Governor of Rupert’s Land and the North-Western Territory in 1869. The only travel route at the time was through the United States with the permission of U.S. President Grant. However, when he tried to enter that jurisdiction from North Dakota up the Red River, he was turned back near the border by Louis Riel’s insurgents before he could establish his authority at Fort Garry (now Winnipeg, Manitoba). Dispatches to Queen Victoria were issued, requesting 1,000 British troops be sent on her authority. Unfortunately for McDougall, the Queen responded indicating that she would prefer a more amicable settlement of the jurisdiction issue.

McDougall returned to Ottawa, where he campaigned against Manitoba becoming a province because of its very few inhabitants at that time. He also continued to serve as an interim leader of the Northwest Territories provisional government from Ottawa until Adams George Archibald took over on May 10, 1870.

McDougall continued as an active politician, serving as a member of the Parliament of the Province of Ontario from 1872 until his defeat in 1887. He passed away on May 28, 1905, at the age of 83.