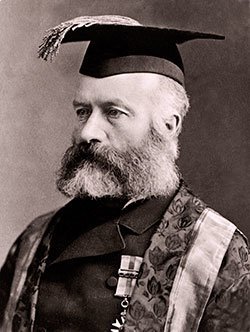 Born in Kirkcaldy, Scotland, on January 7, 1827, Fleming studied surveying and engineering in Scotland and came to Canada in 1845 to work in the railway industry. He was appointed chief engineer of the Northern Railway in 1857 and was the chief engineer of the International Railway during its construction, and in 1871 was appointed chief engineer and surveyor for the historic Canadian Pacific Railway. In 1880, Fleming retired and devoted himself to literary and scientific work.

Fleming spent most of his life in Peterborough, Halifax and Ottawa. Author of many scientific papers on railways and other topics, he was one of the founders of the Canadian Institute for the Advancement of Scientific Knowledge. He published the first large-scale surveyor’s map in Canada, designed the first usable chart of Toronto Harbour and promoted the trans-Pacific submarine telegraph cable, doing all this in addition to handling his duties as chief engineer of the CPR and as chancellor of Queen’s University. Fleming also designed Canada’s first postage stamp, the “three-penny beaver,” in 1851.

One of the major problems Canadian travellers encountered in the late 19th century involved keeping proper time. How could one be sure of having the correct time at every stop along the way? More importantly, how could rail connections be coordinated in a coherent, permanent system? Traditionally, it was noon in each place when the sun was directly overhead. So if it was noon in Toronto, for example, it was 12:25 in Montréal. This system became complicated as voyages became longer. For instance, during the Halifax-Toronto rail journey, passengers had to re-set their watches in Saint John, Québec, Montréal, Kingston, Belleville and Toronto.

In 1878, Sandford Fleming decided to do something about this situation. In a series of papers delivered to the Canadian Institute, he suggested that the planet be divided into 24 time zones, each covering 15 degrees of longitude, from an accepted meridian. The time in each zone would be the same, notwithstanding the position of any point in relation to the sun. Fleming, with his reputation and his energy, encountered little resistance to his idea. By 1883, all railways in North America were using this system. In 1884, the first International Meridian Conference was held in Washington, D.C., and Fleming’s idea was officially adopted. The only objections came from some religious groups who accused him of being a communist and of proposing a system contrary to God’s will.