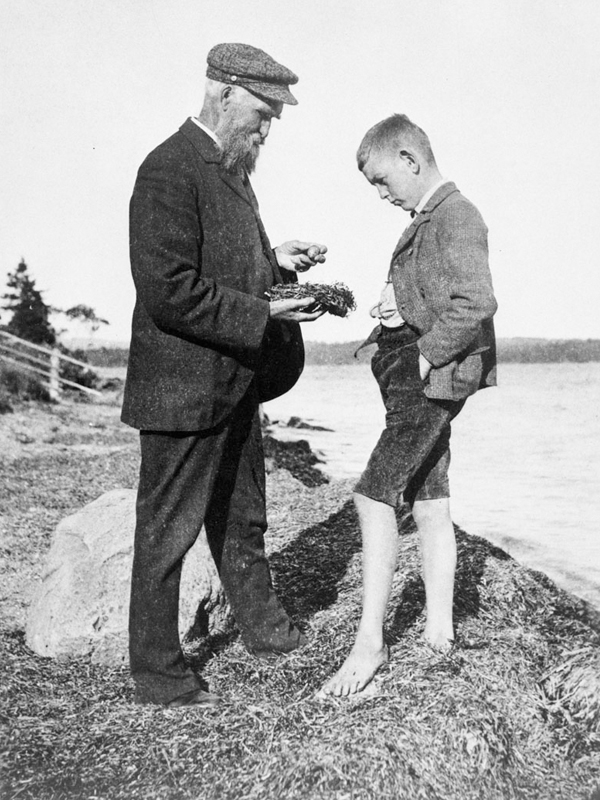 Born in Ireland in 1831, John Macoun was the son of a soldier who died when John was six years old. Educated in a parochial school, he obtained employment as a clerk. In 1850, the family left Ireland for Upper Canada, settling on a farm near that of John’s uncle. Six years later, Macoun became a schoolteacher and taught at several country schools before attending Normal School in Toronto and obtaining a position in Belleville, Ontario, in 1860.

An intense boyhood interest in natural history remained with Macoun when he came to Canada, and he continued his studies of botany, including his practice of studying plant life in the field. His correspondence with expert botanists revealed to them his great knowledge of the subject. As a result, in 1868 he was appointed professor of natural history at Belleville’s Albert College.

While in the Georgian Bay area on one of his field trips, Macoun meet Sir Sandford Fleming, who was surveying possible routes for a railway that would cross Canada. Fleming invited Macoun to participate in the surveys with a view to assessing various terrains for their suitability for agriculture. Macoun’s subsequent work with Fleming came to the attention of the director of the Geological Survey of Canada who offered Macoun a similar position with the Survey. In 1875, Macoun was the botanist of a Geological Survey expedition that explored the Peace River and the Rockies, and from 1879 to 1881 he explored the Prairie regions. Following a later survey of the Yukon Territory, he predicted that even in such northern latitudes farming would be possible.

Like other explorers of the Geological Survey, Macoun was an avid collector of specimens, and the need for storage and display areas for the Survey’s collections led in 1911 to the construction in Ottawa of the Victoria Memorial Museum, now the Museum of Nature. From his collections of plants and his field notes, Macoun prepared a seven-part catalogue of Canadian plants, published from 1883 to 1902. From his bird collections and field notes came a three-part catalogue of Canadian birds, published 1900–1904.

A fine lecturer, Macoun held the interest of his audiences through a combination of vast knowledge, oratorical skills and a keen sense of humour. He was a popular speaker at meetings of the Ottawa Literary and Scientific Society, and he was one of the founders of the Ottawa Filed-Naturalists’ Club, serving for a time as its president. He became a charter member of the Royal Society of Canada when it was established in 1882.

On retirement from the Geological Survey in 1912 at age 81, Macoun and his wife moved from Ottawa to British Columbia where the mild climate allowed him to continue his fieldwork. Although suffering from partial paralysis that required him to learn to write with his left hand, he continued to record his discoveries.

When John Macoun died in 1920, he was buried in the cemetery at Patricia Bay, British Columbia, where his wife had been buried. However, in 1922 they were removed to Beechwood for burial near their son James Melville Macoun, who had worked for the Geological Survey as an assistant to his father.

When John Macoun came to Canada in 1850, he entered a vast and largely unmapped land whose resources were largely unknown. As a member of Canada’s first scientific agency, he earned the title “the enthusiastic explorer of unknown Canada,” and his discoveries revealed much of the nature of Canada’s plant and animal life. Beechwood Cemetery’s Macoun Marsh is named for him. Canada’s foremost field naturalist, Macoun passed away on July 18, 1920.