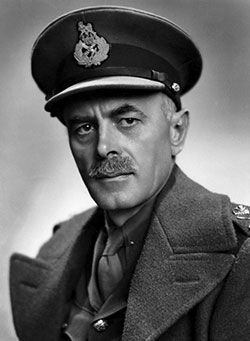 Andrew George Latta McNaughton was born in Moosomin, Saskatchewan, on February 25, 1887. He graduated from McGill University in 1912 with a degree in electrical engineering, before volunteering to serve with the Canadian Expeditionary Force (CEF) in September 1914. He went overseas with the 4th Battery, Canadian Field Artillery.

Applying scientific methodology to gunnery, McNaughton was instrumental in modernizing the artillery and its effectiveness in war. By 1918, he commanded the Canadian Corps artillery.

McNaughton continued his career in the peacetime Army, first as Deputy Chief and then Chief of the Defence Staff until 1935 when he assumed the presidency of the National Research Council. At the outbreak of war in 1939, McNaughton was given command of the 1st Canadian Infantry Division, a post he relinquished in 1943. Returning to Canada, he made a brief foray into politics as Minister of National Defence, 1944-1945.

Leaving politics and the military, McNaughton enjoyed a long and distinguished career as a diplomat, serving as Canada’s Delegate to the United Nations, 1948-1949, Canadian chair of the International Joint Commission, 1950-1962, and Canada’s representative on the Canadian-American Permanent Joint Board of Defence, 1950-1959.

A noted research scientist, McNaughton became a world authority on atomic energy and a United Nations spokesman for the West in dealings with the Soviet Union. He died at Montebello, Québec, on July 11, 1966.