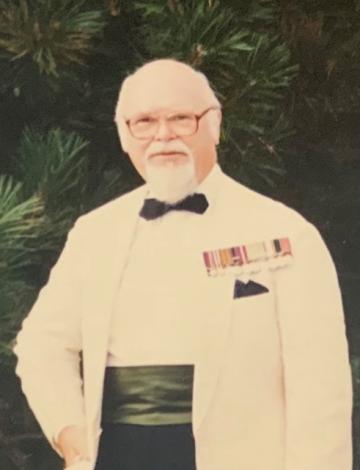 Passed away peacefully, at 99 on Saturday, October  30th 2021. Born in London, ON on June 17th, 1922, Ted was a dutiful soldier who enlisted at sixteen to fight overseas in WWII, and later in Korea. During his time in the service during WWII, he fought valiantly in the Italian campaign, most notably in the battle of Ortona, as a tank gunner. The 1943 Battle of Ortona would become a defining moment of his life, one he would struggle with for the rest of his days. In 1998, he was instrumental in organizing a dinner of reconciliation in Ortona, with 8 surviving German soldiers and 24 Canadian veterans of the battle. Over Christmas dinner, some 55 years later, those who had met as foes found forgiveness and reconciliation. Ted worked tirelessly to see a statue, “The Price of Peace”, installed in the heart of Ortona in 1999, and aided in the founding of the Battle of Ortona Museum.  He was also instrumental in obtaining a Sherman tank and having it installed at one of the entrances to Ortona as a visible symbol of the Canadian soldiers who fought and died in the battle.

After WWII, Ted was sent to the Royal Military College, Sandhurst, for further training. While in England, he met a nursing sister, Sterling Green, at a dance. The two would go on to marry and have a daughter, Amanda. Ted remained in the armed forces, and went on to serve in Korea, before retiring a Major, and joining the Federal Public Service in the 1960’s. As a civilian, Ted was executive assistant to Justice Minister John Turner, who would become Canada’s 17th Prime Minister, among other positions. When he finally retired, he put pen to paper for his memoirs, “Dare to be True”, published in 2000. He also took the initiative to establish the Knights Templar in Ottawa through the founding of the Priory of St. Peter.

Of all his many accomplishments, Ted was most proud of his family. He is survived by daughter Amanda and son-in-law, Dean Mellway, and by his 8 grandchildren Frank, Gillian, Carly, Robin (Nici), Darin (Amanda), Taylor, Kristina (Mike), and Benjamin (Nikki) and 9 great-grandchildren.

The family wishes to express their sincere gratitude to the staff of Perley Rideau for their wonderful care over the last few years.

Interment will take place in the spring at Beechwood Cemetery.

Our deepest condolences. He was quite the guy, full of stories and jokes. He will be greatly missed.

Arrivederci my friend. It was an honour to meet you and bring to fruition those projects so important to you and to the history of the CAF. Ortona will be forever grateful for your valorous fight both in 1943 and so many years later. Safe journey, Ted.

Tojo was a good and loyal friend
and a great Canadian

Was so sorry to hear of Ted's passing he was quite the character,a wonderful human being who made me laugh and would make my day when I saw him with his wonderful storys!! May he rest in peace the world won't be quite the same without you.

Amanda, lots of love to your family. Your Dad was a wonderful man and I hope you have some peace knowing he’s with your Mom. Much love to all.
Kath

My sincere condolences are extended to Ted's family. Ted was my neighbour for a few years. Over the years, we shared stories and I heard of the great contributions that Ted and his colleagues made while serving in WWII. I also learned how he was putting those memories into a book. Ted also proudly talked about his family. He was a lovely man and a great Canadian veteran who served his country very well. He will be missed.

Dear Amanda, Dean and family,
Please accept my sincerest condolences. Amanda, I have such good memories of the times I ran into your dad over the years. It has been many years now but I remember him to be such a gentleman and such a great conversationalist. I loved his stories. He loved his family and I still remember him telling me how much he loved his travels with his grandchildren. A very classy and inspiring man who will be remembered with much love. Such a touching and fitting obituary on Remembrance Day. May he Rest In Peace. God bless.
Jane

To the Griffiths Family,
Please accept my sincere condolences on your loss. I first crossed paths with Tojo as a MP when he was organising the Ortona dinner. He exemplified the best of Canada in war and peace. He was an incredible man who led an incredible life as part of the greatest generation. Rest in peace, Tojo!
David

May Tojo enjoy his rest and the wonderful company of those who loved him, in heaven and remembered by those on earth.