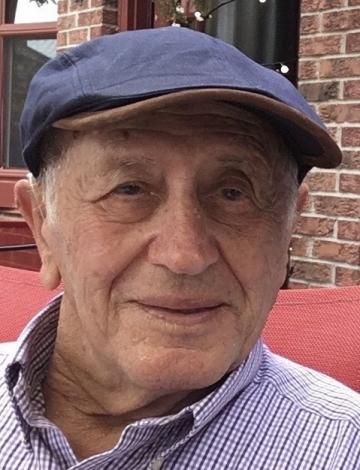 Click below to make a donation on behalf of Peter Yarema

Peter was born in Teulon, Manitoba but spent most of his childhood in Sarto, a small town in South Eastern Manitoba where his parents had a small farm.  At 17, he left home with his older brother and not long after, rode the rails to Toronto where he joined the RCAF.  He flew Mosquito bombers and was awarded the DFC, (later presented to him by his mother).  He was an instructor on Lancaster bombers near the end of the war.   He met the love of his life, Margaret, on a train ride to York, England.  They were married six weeks later.  After the war, he completed a Bachelor of Arts degree at the University of Manitoba.  When the Korean War started, he re-joined the RCAF and flew transports across the Pacific.  He left the RCAF in 1964 and became a case worker for the Ottawa Children’s Aid Society for 22 years. This was his true calling.   After his retirement and until he was almost 90, he was a volunteer driver.  He drove seniors to medical appointments.

He loved literature, poetry, art, music, and architecture and would read to anyone who would listen.

Peter was a strong, but kind, gentle and generous man.  He was an honourable man who always found ways to contribute.

He was pre-deceased in 2014 by Margaret, his wife of almost 70 years.  He is survived by his son John, (Beverly), and daughters, Anne, (Mike), Sarah, (Jamie), grandchildren Damien, (Tracy), Corinna, Matthew, (Victoria), Hannah, and great granddaughter Cecilia.

The family would like to thank the staff at the Perley Rideau Veterans Health Centre, Ottawa and particularly the staff at G2N for the love and care they provided to Peter.

Cremation has taken place.  A Celebration of Life will take place at the Beechwood Cemetery, 280 Beechwood Avenue, Ottawa, from 1 to 3 pm, on Thursday, September 19.   Peter and Margaret will rest together in the National Military Cemetery in Beechwood.

In lieu of flowers, if friends so desire, donations may be made to the Canadian Cancer Society or the Perley Rideau Veterans Health Centre, or a charity of your choice.

I saw your Dad often in the unit G2N when my husband Tom was there. Tom died Aug 1.

Please accept my sincere Condolences for the loss of your father.

Our deepest condolences Uncle John and Aunt Bev. It was an honour to meet Peter back in 2005 and hear his stories of flying bombers. I'll cherish the memory.

What a great life, so sad to see him depart. My condolences to us all.

Its such an honor to have such an amazing relative with an amazing military career that can be told to generations that extend to second and third cousins...and beyone. He lived an amazing life and to my knowledge is the longest living relative I have. Well done Uncle Peter and may your reunion with family that has gone before you be ever so sweet.

He was always so kind and encouraging to me. Yes he occasionally read poetry to me when they resided in Winnipeg and encouraged me in French and chess. Uncle Peter and his family took me on my first long trip which happened to be to Ottawa. RIP Uncle Peter

I will fondly remember Uncle Peter. His kindness, humor, and wonderful storytelling will be missed. Vichnaya Pamyat/Eternal Memory