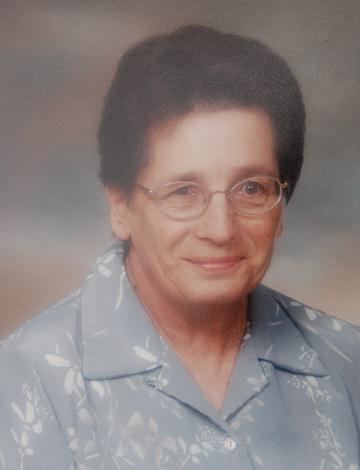 Our Dear Mom and beloved Baba died on Sunday, April 7, 2019, in the Ottawa Civic Hospital. She was predeceased by our Dad, Bernard, in 2010, her brother Bill Pillipow, in 2016 and sister Anne Buchko, in 2006.  She is survived by her four children: Don (Colleen), Diane (Ray), Mike (Tanya) and Mark (Mary), as well as her grandchildren: Natasha (Lisa), Ashley (Sam), Kathleen, Jessica, Christen, Rachael, Devin and Jacob, and great-grandson Donatello. She will also be missed by her siblings: Steve Pillipow, Don Pillipow, Iris Bzdel, Jackie Babey and Peter Pillipow.

Mom lived her faith in her love and devotion to her family, and with a kind and giving spirit. Born on June 20, 1933 in Goodeve, Saskatchewan, she was the eldest daughter of Nicholas and Sophie (Olynyk) Pillipow.  In her youth she was known for having a “tiny but tough” and adventurous persona.  Her father told her that she was born in “the year of plenty”, to be remembered as such during the depression. Fortunately, because they ran a mixed farm, Mom said it felt like her family always had enough food even during lean times.

In 1952, when she married Dad, she took her farm girl identity into her new role of military wife, moving thousands of miles away for Dad’s Air Force postings, one of the first being in Mississippi, USA. Dad’s job entailed frequent travel, and as four children eventually came to be, Mom was exceptionally resourceful and very courageous in managing all aspects of our daily life. She had to learn how to drive, which was uncommon among wives of her time. Despite her trepidation, she mastered the operation of our huge Pontiac vehicle (propped up with her favourite three cushions), before the days of automatic transmission, power steering and brakes. Even with managing a full plate as “Mom of all trades”, she very rarely missed Sunday mass. When we lived far from a Ukrainian Catholic church, she still ensured that our Ukrainian identity was nurtured. She prepared and froze the full range of Christmas and Easter menu items, sought out the annual mother and daughter Easter bonnets, decorated Ukrainian Easter eggs during long winter nights and sewed clothing that was too expensive to buy, like a First Communion dress, skating outfit and special occasion outfits. She would make an ordinary weekend family supper special for young kids, by assembling “chicken in a basket” and allowing exceptions to watch TV during dinner. When her own health issues emerged as a young mother, and she needed surgeries, her main concern was always for the welfare of the family.

Reading was Mom’s guilty pleasure. Whenever we took English or other school courses, if we couldn’t find our novels or textbooks, we would soon discover that she had acquired them for her own enjoyment.

Once her children were older, Mom created new adventures. She made crocheted items for Sarah Clothes boutique, then worked for Consumer’s Distributing store and Canada Revenue Agency, plus she volunteered at the West End Achievers stroke recovery support group. She also took a psychology course at Algonquin College, and remarked that she enjoyed contact with the younger students.  For about a decade, she was a valued employee of the Kmart retail store.  During this era, our family expanded as she and Dad were blessed with grandchildren, who were always spoken of with great fondness and excitement. She took great pleasure in keeping her purse-sized photo album on hand to share at work and after church. Dad used to joke that Mom worked mainly in order to fund her passion for generating treats and activities for the grandkids. She invested significant energies in creating family gatherings both at home and at their second home, the amazing family cottage in the Gatineau region. Mom loved the healing atmosphere of the place. Her “stock” dinner menu items (perogies, cabbage rolls, borscht, air bun donuts) were always supplemented with a host of newly researched vegetable recipes and desserts.

The grandchildren experienced Mom’s “Baba magic” whenever their upset spirits needed settling and extra nourishing. Mom also was the “glue” to keeping family and relatives up to date on the latest news. She took for granted that she needed to enter the computer age to make sure she could engage in email, Facebook and computer games especially with young ones. She was a “carrier of souls” when young and adult family members needed encouragement or at times, her special prayers. Clothing, dolls outfits, Halloween and school concert costumes sewn By Baba, and specially chosen gifts were dearly valued.

Over the decades, Mom was a dedicated member and volunteer at St. John the Baptist Ukrainian Catholic Church. In earlier times, she contributed mostly to Women’s League events. Then in retirement, in partnership with Dad, she engaged in some of what seemed the most unlikely projects, rolling up her sleeves and helping with renovations at the Holy Spirit Seminary when it was in Ottawa. They would arrive home dust covered and exhilarated. Mom did countless other meaningful jobs, such as helping new church members coming from Ukraine, keeping seminary students supplied with homemade study snacks, doing hospital visiting and making the communion bread.  In her later years, while she was caring for Dad and when her own health declined, she still enjoyed helping the women’s group make perogies for events.

While we dearly miss her, Mom and Baba’s generous spirit live on in her enduring love, her shared wisdom and memories of how she prayed through her actions by helping her family and others.

The family wishes to thank the staff of the Ottawa Civic Hospital as well as the staff and the resident volunteers at City View Retirement Community, where she lived most recently. We are also grateful to Mom’s former next-door neighbour Louise McCormick, who was a caring friend when Mom (and Dad) lived in the family home.

If desired, donations in Mom’s memory can be made to women’s or children’s programs at St. John the Baptist Ukrainian Catholic Shrine, 952 Green Valley Cr. Ottawa ON. K2C3K7.

When Sandy and I lived in Ottawa from 1990 to 1995, Auntie Patsy and Uncle Bernie were our second parents. We enjoyed visiting with them often as we were always welcomed as part of the family and it reminded us of being back home in Saskatchewan. Auntie Patsy's food tasted just like my mom's, even the surprise side dish that she "left in the oven" for later consumption. We will always be grateful to Auntie Patsy and Uncle Bernie for allowing us to stay in their home during our transition from Ottawa to Canmore after Matthew was born. I still have fond memories of their visit to Canmore in 1996 - it seems like it was just yesterday! "May God grant rest to the soul of his departed servant Patsy, in a place of green pasture, a place of refreshment, where all pain, sorrow, and sighing have fled away".

So sorry for your loss.

Don, Diane, Mike, Mark and family: my deepest condolences to you. I was fortunate to visit Auntie Pat a few years ago when I was in Ottawa and it was a wonderful few days; she truly was "tiny but tough"! Auntie Pat will be dearly missed.

My deepest condolences. May your lovely memories give you peace and comfort during this difficult time

Paul and I are sending our deepest condolences to all the family on the loss of your dear Mom.Today we know you celebrate her and share the memories of this special woman.

I will always remember Patsy's zest for life. When she and Bernie were married, it was a truly magical moment in my life. Cinderella found her prince!!