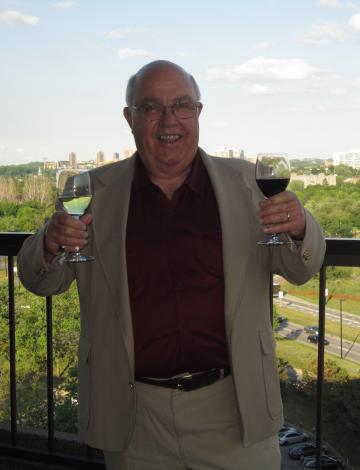 In his 80th year, Kenneth (Ken) James Harley passed away peacefully on December 5th in the care of the Ottawa Hospital with family by his side.  Ken was born on June 5, 1940 and raised in Selkirk, Manitoba.  He attended university in Michigan and Winnipeg, where he received his B.A. in Political Science in 1965.

On June 20th, 1964, he married the love of his life and his best friend, Maxine Scott.  They celebrated 55 years of wedded bliss just this past summer. Now, anyone who knew Ken knew of his love for adventure and travel.  After spending a year with CUSO in Jamaica, he joined External Affairs on June 6, 1966 (6-6-66).  This started a lifetime of wandering the world with his family in tow.  They had postings in Cypress, Cuba, Trinidad, Peru, Washington, and Barbados.  This doesn’t come close, though, to listing the dozens of countries he visited as part of his duties.

Retirement in 1997 continued the travels, especially to warmer climates, but he also got involved in many, many extracurricular activities, both before and after.  He was active with the Antique Car Club, Masonic Lodge, Shriners (where he learned to “fly” planes!), Scottish Rite, Scouts, school boards, and the naval reserves.  He also loved to golf, sail, research genealogy, and deliver Meals on Wheels.

Ken is survived by his loving wife Maxine; children Kym (Dan Cardinal), Debra (Rod Penney) and Kevin (Jane Chipman); and two grandchildren who were the lights of his life - Conor and Maya.  Not to mention the numerous in-laws, nieces and nephews, cousins, and the “just like family” neighbours and friends.

Friends and family are invited to visit at Beechwood Funeral, Cemetery and Cremation Services, 280 Beechwood Ave. Ottawa, on Tuesday, December 10 from 12:30 p.m. until the time of a Masonic Service at 1:30 p.m. which will be followed by a Funeral Service at 2 p.m. Interment and reception will follow.

In lieu of flowers, donations can be made to the Ottawa Heart Institute or the Cancer Society.

To Deb and her family. You are all in our thoughts. May you find comfort in each other during this time. Cherish the memories. May peace be with you.

So sorry to have heard of Ken's passing. We remember all the good times we had together, meeting for supper and being together at Clear Lake. We also remember staying with you in Ottawa. |We were treated royally by both of you. He certainly will be missed.

Dear Maxine
Sincere sympathy to you and your family for your loss.

My condolences to Aunt Mick and family. Always enjoyed my little time with Ken.

We went to school in Selkirk with Ken. So sorry to hear of his passing.

I am incredibly sorry for this loss. Luckily, all these amazing attributes are inherent in his children which only shows how great of a man Kenneth is!

So sorry for your loss . I have such fond memories of your family Deb. I wish you and yours many many treasured memories to last your life time.. Big hugs to you, your mom, Kym and Kevin. Xox

I have great memories of a truly kind person. Ken told great stories from his rich life of experiences. My father loved to talk politics with Ken who always had that added bit of insight, especially on world affairs. What a lovely man.

Our most sincere sympathy and condolence to Maxine, Kim, Deb. Kevin and the extended family. In the 53 years that we have known Ken and Maxine, he was a true friend, full of life and humour with many varied interests. He served Canada with distinction in many different postings abroad and in Ottawa. We will miss him. Our thoughts and prayers are with you at this difficult time.

My deepest condolences to you, Maxine, and the family. I am still hospitalized and won't be able to attend the memorial but my thoughts and prayers will be there. The children and I have many fond memories of Thanksgiving with the Harleys and a wonderful sleigh-riding party. Gail