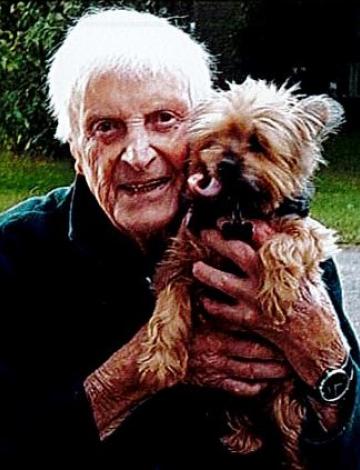 He will be fondly remembered by son-in-law Tim Ouellette, brother Larry Stewart (Pat), brother-in-laws Denis Robitaille (Suzanne), Gerald Robitaille (Yvonne), sister-in-laws Gisele Robitaille and Lucy Stewart.  He will be dearly missed by many nieces and nephews.

He will be greatly missed by his loving sidekick of 14 years, Dove.

A graduate of the Ottawa Technical High school, Ray proudly served in the Canadian Reserves (RCAF Branch) for three years before enjoying a long career as an electrical engineer and radio technician with the National Research Council of Canada.  He was an avid golfer, biker and every day “Jack of all trades”.

The family would like to give special thanks to the Ottawa General ICU team in his final day.

As per Raymond’s wishes, no funeral service will be held. In Lieu of flowers, please consider making a donation to the Ottawa Humane Society.

Ray always had a ready smile and a quick wit and loved telling jokes. He definitely was a man of many talents. Our condolences to LeeAnn, Paul and extended family and friends. He will be greatly missed by loved who loved him most but will remain in their hearts and memories.

Our sincere condolences to you and your family, Lee-Anne.

Uncle Ray will be dearly missed. Always kind, gentle and compassionate, very funny, artistic... and a wonderful dancer (especially with his beautiful wife Colombe in his arms). Love and comfort being sent out to all whose lives were fortunate enough to be touched by Uncle Ray.

Brother Larry -- the last of us five Stewart kids

Unfortunately, Covid-19 disturbed our trips to Denny's for lunches and trading stories. We were limited to those brief phone calls too. Rest in peace Ray, you did it your way and you will be missed dearly.

I will always remember Uncle Ray for his infectious sense of humour and many, many jokes! I will miss calling him to touch base and hear his oh, so familiar voice! Godspeed you, uncle Ray! Thank you for calling regularly to check up on me after my dear Dad and Mom passed! I am going to miis those calls more than you could ever know! Rest in peace, until we meet again! With love; Larry #2

My condolences to Ray's family and many friends.  I was fortunate enough to meet Ray quite a few years ago through our shared interest in the Monday bowling league.  He was a gentleman in the best sense of the word and always had a joke to pass along, many of which we had heard many times, but still enjoyed.  Seeing him at bowling and having a coffee or tea with him at Tim Horton's was always a happy time to which I looked forward.  He always said he had a good life and had no regrets, which is rare in this world. Rest well my friend.

Condolences to Ray's family. We were lucky to have Ray and Colombe as our next door neighbors on Tawney Road from 1993 until they moved in 2012. We enjoyed using their pool and having a few to many glasses of red wine with them both. Ray loved a good laugh. Rest in peace Ray.

My deepest condolences to the family. I had the pleasure of knowing Ray when I joined the bowling on a Mondays.

Condolences to Ray’s family. I had the pleasure of meeting Ray at Monday bowling. He was a good bowler even at his advanced age. I can only imagine how good he must have been in his younger years. I’m going to miss that and getting together after bowling at Tim’s for a coffee. He always had a joke or two for us.
Rest easy buddy.