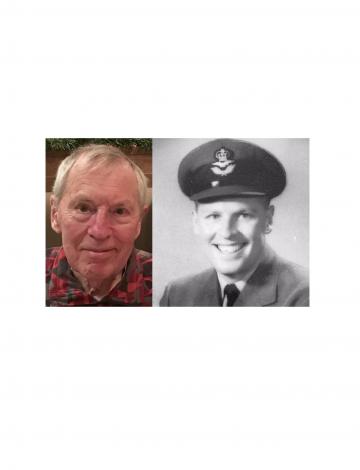 It is with great sadness that the family of LCol Robert (Bob) Merrick announces his passing on Dec 10, 2020 in Orleans, Ontario.

Bob is lovingly remembered by his wife Barbara, daughters Andrea (Stephan) of Calgary, Allison (Brian) of Ottawa, granddaughter Megan and his brother Alan (Nan – deceased) of Vancouver.  Bob was predeceased by his sister Sheila and brother-in-law Dick and his grandson, Zak.

Bob was born in New Westminster, BC on May 31, 1933 to Elmer and Maisie Merrick. He married the love of his life, Barbara in 1959, and a little later two daughters came along.

Bob had a keen sense of humour, which he shared with his daughters, and their ‘conversations’ often caused his wife and sons-in-law to roll their eyes. He remained steadfast in his love for wife and his family throughout his life journey.

Bob always greeted those around him with a smile that lit up the room. He was a kind and gentle soul who could talk with anyone and was always interested in what you had to say. His walks around his neighborhood often took longer than necessary because he visited with whomever was out and about and wanted to chat.

Bob joined the RCAF in 1956 as an intercept navigator and embarked on his Air Force adventure. His military career saw him posted to exotic locales such as LaMacaza, Comox, Bagotville and Phoenix, AZ ending with a final posting to NDHQ in Ottawa.  After retiring from the military, Bob worked at Transport Canada on Aviation Safety Programs. He was also a long-time volunteer with the Canadian Aviation and Space Museum, the Ottawa Police Service and he contributed many book reviews to COPA. When not volunteering, Bob enjoyed exploring the world with Barb on cruises with close friends or car trips in Canada and the US. Always a writer, he kept journals of their adventures to go along with the pictures they took.

Over the past few years, Bob slowly slipped away due to Parkinson’s related dementia.  This disease did not define his life nor his ending.  His smile and sense of humour remained intact. Per ardua ad astra.

We would like to thank Chapel Hill retirement residence for the safe haven provided to Bob and many, many thanks to the nursing team and compassionate PSWs who took care of him.

In remembrance of Bob, please donate to a charity of your choice.

Friends and family are invited to a celebration of life at Beechwood Funeral, Cemetery and Cremation Services on June 18, 2021 at 1:00 pm with interment to follow in the National Military Cemetery of the Canadian Forces at Beechwood Cemetery.

Barb, we are so sorry for your loss.

The best navigator and best friend a guy could have.

A great friend and travel companion

Many fond memories of our neighbours on Vinette Cres. Always a friendly wave and hello as he headed out for a run. I will miss greeting Barb and Allison in the hallways at Chapel Hill as they provided devoted care to Bob.

A Colleague, a Mentor, a Friend.

Magic with words both written and verbal, he was instrumental in getting a young staff officer in the Nav career shop through the NDHQ maze and surviving a 38 year career. Many thanks Bob!

A sad farewell to a true gentleman.

He will be remembered in La Macaza in special presentations about the history of RCAF Squadron 447 Bomarc Station. Thank you for your service. RIP

A true gent through and through

We will always remember him: he was a true hero to everyone out here - his writing in the COPA newspapers are still remembered by many a West Coast aviation enthusiast. He wrote many, many articles stressing the need for proper planning in all aviation practices.