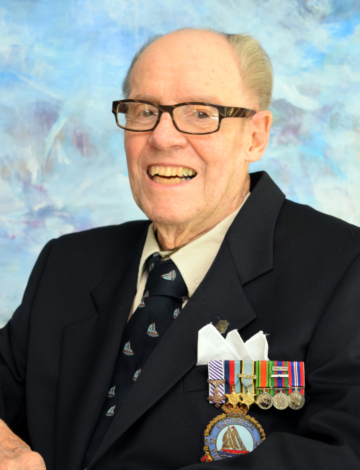 Born in Toronto, Ontario, Bill attended high school at Dundas High and then graduated from No. 1 Air Observer School in Malton, Ont. as a commissioned Pilot Officer in March 1943. On 14 April 1943 Bill left Halifax on the SS Bayano and arrived at Cardiff, Wales on 29 April 1943.

Bill returned to Toronto on 11 November 1944 and served at No. 12 Aeronautical Inspection District. In February 1945 he was assigned to the Eighth Victory Bond Drive doing public appearances before VE Day. A last appearance was from the front steps of the Toronto City Hall at the intersection of Bay and Queen streets to a crowd of hundreds. In March of 1945 he was promoted to Flight Lieutenant.

Bill was married to Isabel Jean Still the 18th of August 1945 in Burk's Falls, Ont. Bill obtained a Bachelor of Applied Science degree in aeronautical engineering April 1949, and later a Master of Commerce degree in June 1959, both from the University of Toronto.

Following graduation in 1949, he started work with the Gas Turbine Division of A.V. Roe Canada as a Specialist Engineer Vibration responsible for improving the durability of Orenda and Iroquois gas turbines. Bill remained there until 13 February 1959, when he won a competition to become a plant representative at the A.V. Roe Company responsible for overseeing contract work on 15 February 1959 and the work required following the termination of the Arrow project on 20 February 1959.

In February 1960 he was transferred to Burbank, California with Lockheed Aircraft to oversee the work to reconfigure the F104 to perform the nuclear strike role by CF104 aircraft to be in Europe by July 1962. Bill and Isabel and their four children moved to Burbank in April 1960.

Bill was transferred to Ottawa to become Chief of No. 1 Division of the Aircraft Branch in August 1964. In May 1965 he was responsible for implementing the CF5 program to provide an interim fighter and dual trainer for the RCAF and created the conditions required to supply the NF aircraft to the Royal Netherlands Air Force (RNAF), which resulted in the sale of NF5 aircraft to the RNAF in November 1967.

Bill retired in 1986 after some 30 years in the Public Service.

Who was the man that was William Johnston?

Bill possessed an integrity and commitment to truth that never wavered in his long life. His family was so precious, one he supported and defended  with all his strength. A man who personally cared for his wife until her passing, showing endurance and love so rare. A man who set a high standard for himself and made the world a better place in doing so. He will be greatly missed by those who knew and loved him.  A private interment will take place in the National Military Cemetery section of Beechwood Cemetery, Ottawa.

I am certain the world is a better place because of this amazing man. Rest in peace. Condolences to his family and friends.