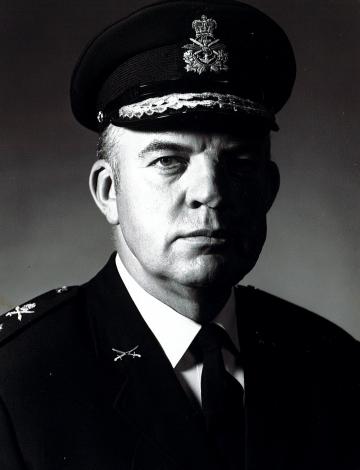 The Royal Regiment of Canadian Artillery

Having suffered a debilitating illness for several months, Howie passed away in hospital with loving family by his side.  He is survived by his devoted wife of 59 years, Mary Margaret (nee Rapawy) of Windsor, ON, beloved twin sons Robb (Kristin Moore), and Michael (Jenn), cherished grandchildren Lillian and Coulson, his sister Dorothy (Ralph Baker), and numerous nieces, nephews, and cousins.  He will be very much missed by family and friends.  He was predeceased by his parents Charles and Marjorie (nee Ramsay) and sister Helen (Glenn White). Although born in Petrolia, he attended secondary school, SDCI, in Strathroy, ON where his fascination with the military began through his involvement with Army Cadets, an interest that remained strong throughout his life.  In retirement, it gave him great pleasure to have been appointed Colonel Commandant of the Royal Canadian Army Cadets.  He was a graduate of Royal Roads Military College, Victoria; the Royal Military College in Kingston and Queen’s University.

Commissioned in 1959, Howie joined 4th Regiment, Royal Canadian Horse Artillery (RCHA) in Petawawa for his initial term of regimental duty during which he was attached to a Canadian signals unit on United Nations duty in the Congo.  He also served as a Staff Captain at Army Headquarters at the time of the integration of the three services, before being selected for attendance at the Canadian Army Staff College.

A succession of increasingly senior administrative and operational staff appointments followed in Canada and Germany, including Chief of Staff Administration at Force Mobile Command Headquarters in Montreal and culminating as Chief Land Doctrine and Operations, in the rank of Major General, at National Defence Headquarters.

It was in the service of The Royal Regiment, however, where Howie derived his greatest career satisfaction be it as Battery Commander A Battery, 1st Regiment RCHA in Gagetown and Germany; Commanding Officer 2nd Regiment RCHA in Petawawa; as Director of Artillery in Ottawa; Commander Division Artillery at Exercise RENDEZ-VOUS 85 in Suffield – one of the largest peacetime artillery events of its kind – or, as Senior Serving Gunner.  Few matched his ability as a trainer or motivator of artillerymen.

Once the family decided to build a cottage on Crow Lake in 1974, perspectives shifted somewhat.  The military remained a prime focus, but night school classes in electrical wiring, plumbing, and furniture building began to dot the calendar.  The cottage, with its many challenges, became a very special place.  But in retirement, Howie became the family genealogist for the Wheatley family that immigrated to the Sarnia area in 1837.  His goal was to describe the life and times of the family members from the time they first made their way to British North America until the present.  A daunting idea, but he did publish one of the seven volumes planned – an extraordinary effort.  Three other volumes, each more than half finished, are now looking for younger members of the family to take up the cause.  However, it was the entry of his class of ’58 into the Old Brigade at RMC that made Howie step back from genealogy long enough to compile The Book of Biographies  for his classmates – yet another Howie-sized accomplishment!

Family and friends are invited to a Celebration of Life that will take place on Saturday, September 7th, 2019 at Beechwood, Funeral, Cemetery and Cremation Services (280 Beechwood Avenue,) at 1:30pm.  In lieu of flowers, donations may be made to the Army Cadet League of Canada, the Royal Canadian Artillery Heritage Fund, or the Canadian Cancer Society.

I had the extreme pleasure and honour of serving with MGen Wheatley in Germany and Petawawa. He was a superb teacher of all things artillery.
He will be remembered, and missed.

First met then Major Wheatley when, as a young Infantry officer in the mid 60s, was attending effective gunnery training in Germany. I think my head still vibrates a little having received a quick smack on my helmet from a shooting stick for not making a correction fast enough. My reactions instantly made a drastic improvement !!!! An officer and a gentleman that I often happily met throughout my career and for whom I have the greatest respect. Mike

He will be missed.

I served under Howie when he was CLDO. He was one of the best bosses I ever had.

As 1RCR Mortar Platoon Commander I enjoyed his mentorship during gun camps as the Commanding Officer of 2RCHA. A fine Officer and Gentleman. RIP

As the division COS on RV85 I had the privilege of working with Howie on a daily basis. What a kind gentleman AND an imposing figure. I'm sure glad we got along!

I remember how proud he was to be a Royal Roads Cadet, how dedicated he was to his studies at Kingston and Queens, how he enjoyed playing university football, how much he disliked calculus, and how happy he was to reach his goal to serve his country. He did it all with pride and distinction. My family loved this kind, gentle, caring man and we will miss him.

Uncle Howard has always been the distance (geography) support through my enlisted career in the US Army. My love goes out to Mary. I understand exactly the grief and change ahead of her. I hope Howard, Grandma, Grandpa, and my son Aidan are hanging together in heaven talking about history which was Aidan's favorite subject! It makes me smile to think he is surround by my military family. Love, tracee and gang

Very Sorry to hear of your passing Sir.

I only knew you for a little while but you were impactful.

Howard was my CO in SDCI cadets and was also in the Reserves as a Lt in the Canadian Fussilieres City of London Regiment which later Became RCR. I was proud to know him and met him a few times in Ottawa