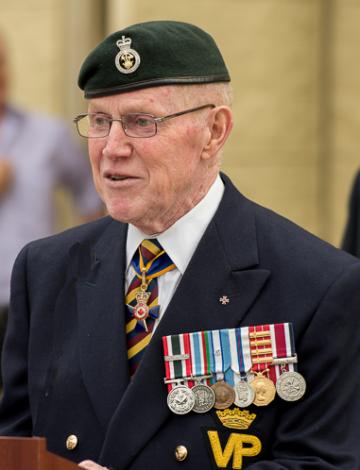 Major-General Bill Hewson passed away peacefully on February 3rd 2021, a day after his eighty fourth birthday. His wife Norah was at his side.

Bill and Norah met at a party in Toronto in 1959, where he was a recent graduate from the Royal Military College gaining a civil engineering degree from the U of T.  Norah was a student nurse at Sick Kids Hospital. They said goodnight, but Bill was smitten, and he called Norah the next day to ask her to dinner. Despite postings and deployments across Canada and to Germany, England, Cyprus, Australia and Belgium, he never really left her side again. He married Norah in 1961, and they made homes together around the world. After raising their sons Douglas and Richard, they retired to their property on Calabogie Lake, in the Ottawa Valley.

Bill lived his life with honour, courage and loyalty. His military service began with command of a rifle platoon in Princess Patricia’s Canadian Light Infantry. He was promoted to positions of increasing responsibility with the Patricias and in the Intelligence Branch. He served as Commanding Officer of 1st Battalion PPCLI; Commander of the Canadian Contingent to the UN Force in Cyprus; Chief of Intelligence at National Defence Headquarters in Ottawa, and as Assistant Chief of Staff, Intelligence at SHAPE, the NATO Headquarters in Mons, Belgium. Appointments as the Colonel of the Regiment, PPCLI; Colonel Commandant of the Intelligence Branch, and as a Commander of the Order of Military Merit reflected his dedication to his Regiment, his Branch, and his Army.

Bill was promoted to the rank of Major-General in 1985, and retired from the Canadian Forces in 1991. He served as Director General of the Communications Security Establishment (CSE) until 2000.

He was a leader to all, and a mentor to many.

As a husband, father and grandfather, he showed us how to live a life with love, humour and integrity, and without fear or regret. At a ski hill or a hockey rink, at a board room table or a carpenter’s work bench, and in all our many different homes around the world, he was the steady presence that inspired us with confidence that no matter what happened, he’d always be there.

Bill is survived by Norah, the other half of the Dynamic Duo. He is survived as well by Douglas (Marisia), of Kanata, Ontario and by Richard (Stephanie) of Vernon, BC and their sons Mitchell and Spencer.

The family is grateful for the care Bill received from his physiotherapist Mr. Ben Wassell, Dr. Kristian Davis, Dr. Tilak Mendis, and the staff at the Queensway Carleton Hospital, including Dr. Sanjay Acharya.

A private service will be held at Beechwood Cemetery in the near future. All of Bill’s family, friends and colleagues will be welcomed at a Memorial Service, to be scheduled and announced as soon as better times return. In the meantime, please consider a donation to Parkinson Canada.

Sorry to hear. A wonderful person and well respected. My condolences to all. ~ Kingston

My deepest condolences to you Norah, Douglas and Richard. This is a great loss for so many. A man who would always take the time to check in with whoever he was interacting with. He was very passionate about all that he did. RIP Sir.

Dear Norah and family,
What sad news to learn of your loss of this wonderful gentleman soldier and friend. He was indeed a self less leader and god example of integrity, devotion and loyalty to all who served with him. Marlene and I appreciated your friendship and with hugs and great sympathy for your precious loss, offer you and the family our warm understanding and love. He was a great Canadian!!!

Among his many contributions to the veteran’s community, Bill served as the Board Chair and long-time governor of the Ottawa Division of the Corps of Commissionaires. I was privileged to know and work with Bill in that venue and was impressed by his compassionate leadership and generous gift of his time and knowledge. Rita and I are saddened to learn of Bill’s passing and offer our deepest condolences to Nora and his family.

I would like to offer my condolences to Norah and family on the passing of this wonderful man and great Canadian. He will be missed.

A wonderful human, an extraordinary Officer in the Canadian Forces, a constant friend and mentor. He will be missed, he will be remembered!

Sir, May you Rest In Peace. It was honour to have known you.

General Bill Hewson: Officer, Gentleman, Warrior, Leader, Mentor, Friend and Role Model to All in the Intelligence Enterprise - A life well lived and we will not see his like pass this way again. My Sincerest Condolences to Nora and Family..

Bill was the best example of a leader, mentor and friend. He gave generously of his time and was forever a Patricia. Norah our deepest condolences. He truly was one of a kind.
We are both thinking of you and your family.

A great man left us. He traced the path of way ahead as a legacy for our community.