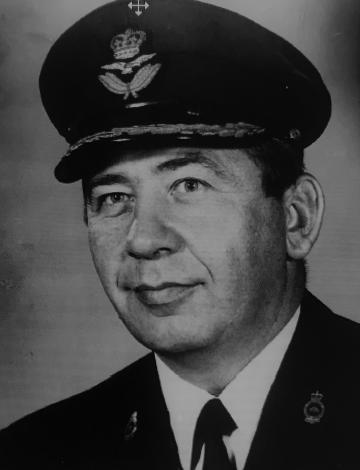 Click below to make a donation on behalf of John Blasko, Lieutenant Colonel (Ret'd)

Born in Oshawa ON, John spent his early years there with his five siblings (Mary, Anne, Natalka, Olga and Bill) until graduating in 1956 from Ryerson Institute of Technology in Architectural Building Technology, and starting his career as an architectural draftsman and construction manager.  During this time he met Olga Wayda, who became his wife of 58 years and who he had missed heartbreakingly since her passing in 2016.

John joined the military in 1962.  Being a military engineer was his calling and his passion, and he excelled in leadership roles across Canada, including at North Bay, Gypsumville, Uplands (Ottawa), Shearwater and Halifax NS, and Trenton ON, sharing his wisdom and experience in a generous, energetic and often loud way.  He retired in 1989 and continued recounting stories of his escapades for the next 31 years.  This included hooking up a steam locomotive in northern Manitoba to bring heat to the small radar station in Gypsumville when the Central Heating Plant failed in -40 weather.  After retirement, John worked for the Department of National Defence for a short period as a civil servant, where he experienced his first labour strike from the other side of the picket line.

John served his community in retirement, being a long standing member of Kente Kiwanis and recognizing many hundreds, if not thousands, of Terrific Kids in the Trenton area.  He also got great enjoyment from wood working, making and selling wooden dinosaurs and trains.  He coached both his sons in hockey, helped stand up the first midget triple A team in Dartmouth NS and was a die-hard Leafs fan.  He and Olga traveled frequently and enjoyed many trips throughout Europe, a number with long-time friends Bill and Catherine Van der Voort.

John and Olga had four children of whom they were very proud, and who were fortunate to be with him during this last difficult stage of life, letting him know he was loved.  They will miss him sorely:  Debbie and Bernie Derbach, Jim Blasko and Sue Blasko, John and Margo Blasko, and Darlene and Pete Quinn.  John and Olga had seven grandchildren (Elyshia, Jennifer, John, Matthew, Taylor, Meghan and Jordan) and John was thrilled to greet his first great grandchild, McKenna, this past October.

John will be remembered as a large personality, who always knew what to do in any circumstance, and who could be relied upon to share his opinion on any topic.  John passed away in hospital 20 March 2020, finally joining Olga.  A celebration of life will be held at a later date and his family would appreciate that you think of him kindly and if you are so inclined, consider donating to the Ottawa Hospital, who provided him with excellent care.

Dad, it is so hard to believe you are no longer with us. You may be out of sight but never out of mind and always in our hearts. Rest well and enjoy life with mom in heaven.❤

My deepest sympathies to the entire Blasko family. May your father find peace with Olga and Johnny. Please know you are in my thoughts and prayers.

So sorry to see another warrior make his final flight west
Gone forever - forgotten, never.
My condolences to the entire family

I was very saddened to hear that John just recently took his "last flight west"
My condolences to the Blasko Families.

John, you were one of my oldest and closest friends, and I never really thought of you as my father-in-law. I loved getting together to chew the fat over coffee and argue politics and hockey. Please give hugs to Olga and our John when you see them. We will miss you dearly.

Thinking fondly of past Air Force times with John and Olga. May they rest in peace
To live in the hearts we leave behind is not to die
Condolences to the family and friends

My heartfelt condolences to all of John's loved ones. I remember John as an Engineer powerhouse during my early days in uniform, whose exploits never failed to amaze and inform. We will cherish our memories of him and keep his memory in our hearts.

John Blasko and I first met and served together in the construction engineering division of Maritime Command Headquarters in the late 70's. John was a wonderful supportive colleague and friend of whom I was and remained very fond. The sad news of his death brought back many cherished memories of those busy but happy times in which John played a prominent role. My heartfelt condolences go to BGen Darlene and the whole Blasko Family.

Deepest sympathies to the extended Blasko family. A loss to loved ones on this Earth, but I'm sure that Heaven just got a little wiser and kinder with his arrival.

John, I only had a few opportunities to meet you, but I feel as though I knew you well through the eyes of Darlene and Pete. Rest in Peace Sapper.