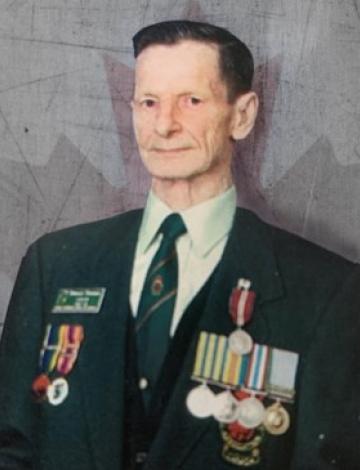 While his ability to function physically lessened, his love of music, his sense of humour, resilience and will to live endured. Donald is remembered as a devoted husband to wife Cecile (nee Holland). He is survived by his children Robert Squires, Kathleen Beauvais (Dave Deverall), Shirley Squires (Robin Roberts) and Daniel Beauvais (Rhonda), grandchildren Christopher, Cassandra, Holly and Melanie. Donald is predeceased by five siblings. He was born and raised in Montreal, Quebec. He enlisted in the Canadian Armed Forces in 1950. Donald served two tours of service in Korea, one in 1951-52 through the war period and then in 1954 with the United Nations Peace Keeping Forces. As a member of this force, he later received an authorized replica of the Nobel Peace Prize. Donald moved to Kitchener, Ontario in 1987. He was an active member of the Korean Veterans Association, Unit 13 in Cambridge, Ontario for many years, serving as Unit Treasurer for part of that time. He cared deeply for his fellow comrades and maintained life-long relationships with many. In 2013, Donald was awarded the Queen’s Diamond Jubilee Medal. In 2014, he received a Minister of Veterans Affairs Commendation for his many contributions, including the motion to have a commemorative plaque presented to HMCS Haida – a plaque which pays tribute to the eight ships and more than 3600 members of the Royal Canadian Navy who participated in the Korean War. Donald spent his last months at the Parkwood Mennonite Long-Term Care Residence and received periodic care from Saint-Mary’s Hospital.

Donations in memory of Donald may be made to St. Mary’s General Hospital Foundation or to the War Amps of Canada.

Our hearts go out to you and yours. May the many fond and happy memories give you strength during this difficult time.