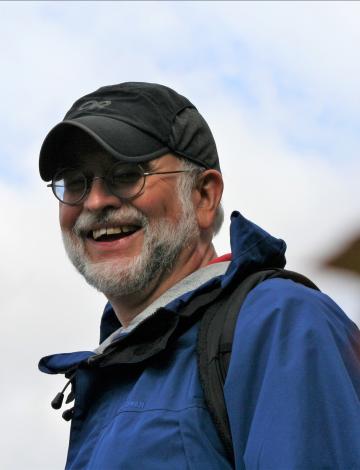 It is with great sadness that his family announces the sudden passing of David Wright in the morning on Monday, June 7th, 2021, at the age of 57.  David was an avid reader and; enjoyed hiking, biking and he traveled extensively. His passion was European football; David was a dedicated fan of the Tottenham Hotspur F.C., the Bolton Wanderers F.C. and the England Football Team.  David grew up in Edmonton, Alberta and received his Bachelor of Arts in History from the University of Alberta, followed by a Master’s Degree in History from York University in Toronto.

David retired in 2018 after a successful 31-year career with the Federal Public Service, working in various departments, including the Department of Justice, Canada Customs and Revenue Agency, Canada Border Services Agency, Immigration, Refugees and Citizenship Canada and the Royal Canadian Mounted Police.  David was an accomplished cellist and an active member of the Ottawa classical music community, belonging to several orchestras and ensembles, including the Lansdowne String Quartet. A valued member of the Ottawa Symphony Orchestra (OSO) for 24 years, he served as the musician representative to the OSO board.

David leaves behind his beloved spouse, Josée Therrien and his in-laws Noëlla and Jacques. A dear son of the late Francis and Barbara Wright, he also leaves behind his brothers, Christopher, Adrian and Ian, his nephews and nieces, Tim, Robert, Kelly, Emily, Terri, Sarah, Stephen, Bronwyn and Simon, and his great nephews and great nieces, Abigail, Anna, Theodore, Alexander and Sydney.   The celebration of David’s life will be held at Beechwood, Funeral, Cemetery and Cremation Services, when COVID restrictions allow for a larger gathering.  In lieu of flowers, a donation in the memory of David made to the University of Ottawa Heart Institute Foundation would be appreciated.

Dear Josée - My heartfelt condolences to you and your family. I feel honoured to have both worked with David and attended many of his concerts with the OSO and most recently, the elegant small gatherings where his musician skills shone. He was a wonderful person, and a great friend. To say he is missed is beyond an understatement.

Such a sad loss. David was an honourable man. I always enjoyed his cello playing and his personality. He was such a reliable colleague in the Ottawa Symphony and such a decent man. My sincere condolences to his family.

My deepest sympathies Josée. I had the privilege of playing music with David over the past almost 3 decades. He was an amazing musician and a lovely man. He will be missed.

Josee, please accept my sincerest condolences and sending you strength during this difficult time. I can see that the loss of David is wide reaching, which clearly speaks to what kind of amazing person he was. You are in my thoughts.

Dear Josee-I am truly sorry for your loss. I will always remember having interesting and thought provoking political discussions with David. His infectious smile never failed to uplift my day. It has been a privilege to have known him. Dr Manzig

So sorry for your loss Josee. David’s laugh was infectious and he will be missed so much.

I had the opportunity to work with David many years ago at IRCC, and also to attend a NAC concert in which he performed. He was not only a talented professional, but a dear colleague who was always wonderful to talk with. I am truly sorry for your loss and wish you courage and peace during this very difficult time.

I am sorry to hear about David's untimely passing. I worked with David at the Department of Justice and appreciated his kindness and his sense of humor. I remember him as a valued colleague and a gentle soul. My condolences to his family and friends.

My sincerest condolences. I had the opportunity to meet David while at IRCC. I'm very sorry for your loss, God bless.

Kindness comes to mind when thinking about David. The world would be a better place if only we had more of you. In the 1980s Raissa Orlowa Kopelew was exiled by Soviet Russia. Her impressions and reflections about her new Heimat she expressed in a book titled Die Türen öffnen sich nir langsam (Doors open only slowly). When I immigrated to Canada in the 1990s it was David who helped opening those doors. At that time he was occupied with three reoccurring topics: Hockey, Elections, and Music. He introduced me to my first Hockey Night in Canada. I stood up after the game and got ready to leave which surprised him. There’s a second game! Just sit down and have a beer. I was baffled. He also knew every Stanley Cup Winner, chronologically. I recall the endless discussions about electoral issues and the importance of proportional representation. And who knew that David had a spreadsheet with the candidates of every riding in Canada. He always knew the election outcome before the actual election. I recall our endless talk about Mahler’s 9th and wether Shostakovich was a Soviet collaborator or resistance fighter. The end of the 9th makes me cry, he said. No Dave, say Hi to Glenn and have a talk with J. S. about The Fuge. In the meantime, I became a married Canadian. Dave helped opening the doors slowly but surely. I owe you Bud. Someone will finish your bike ride, promised.
You have my deepest thanks
Ralf 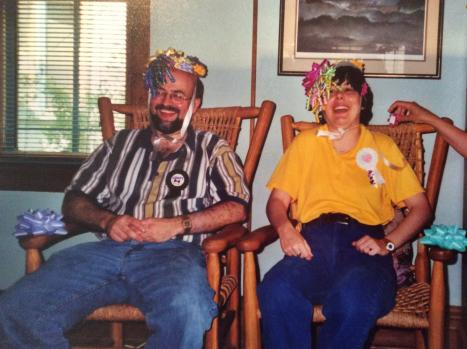 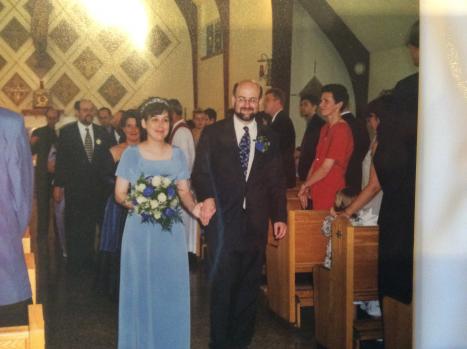 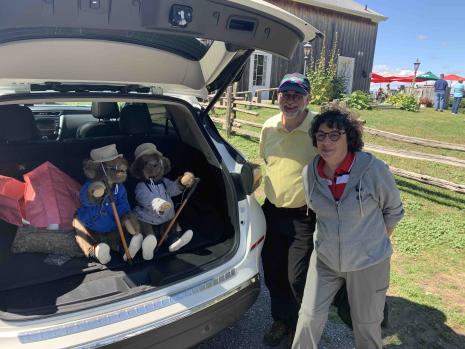 David Wright and Josée Therrien with their "hiking bear" doppelgängers, made by their beloved friend Wendy Nicol.
Submitted by Tim Lougheed 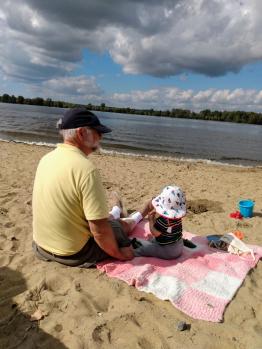 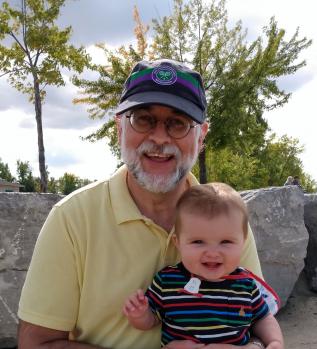 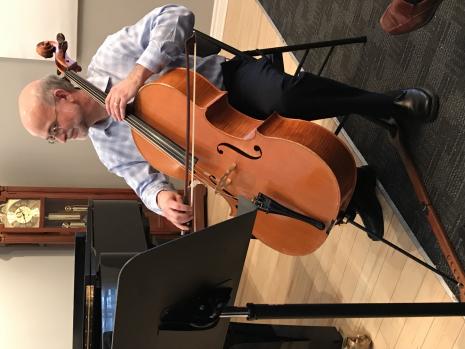 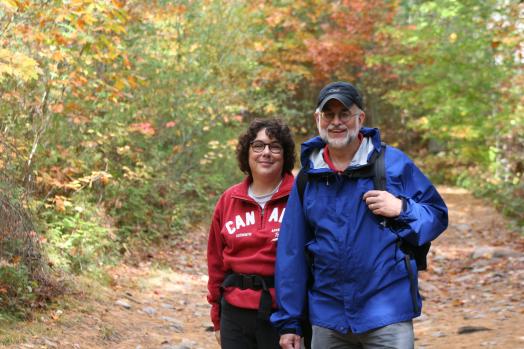 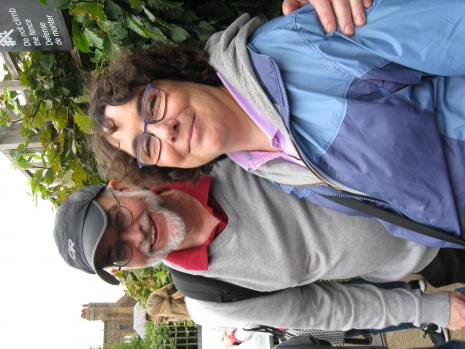 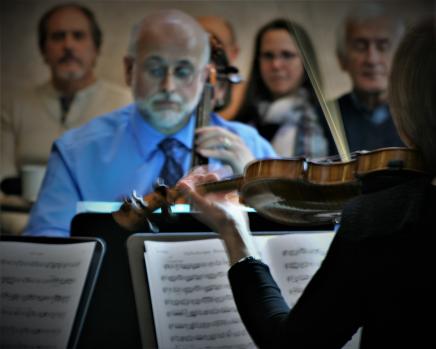 The Cellist
Submitted by Debora O'Neil 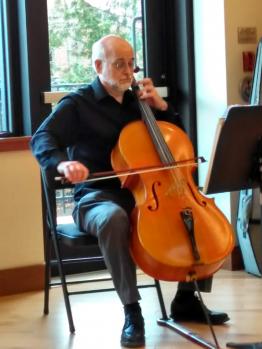 A memorable concert during the pandemic. David shone.
Submitted by Karen Kirby 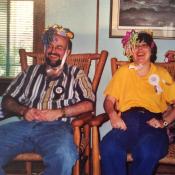 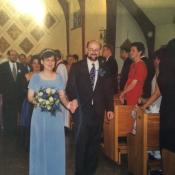 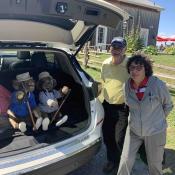 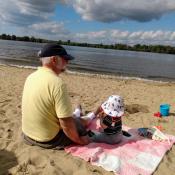 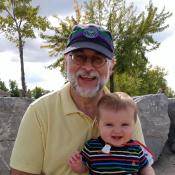 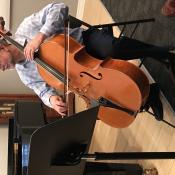 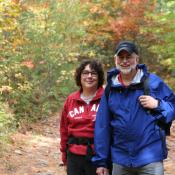 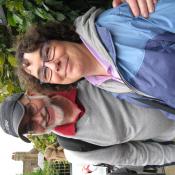 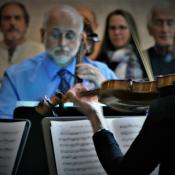 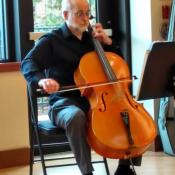