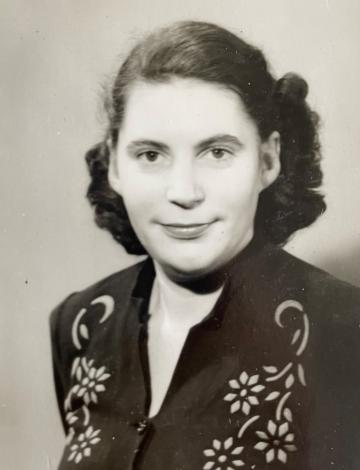 Beryl passed away peacefully on Monday 14 June 2021, at The Ottawa Hospital, Civic Campus, after a brief illness, at the age of 92.  Beryl was the beloved wife of the late Jaroslaw Wladyslaw (Wladek) Gawel and the cherished daughter of the late Edward and Theresa O’Neill Reid of Dublin, Ireland.  The greatly loved mother of Peter and Angela, mother-in-law of Shafiuddin Ahmad, and grandmother of Kristen and Miriam Ahmad-Gawel.  She also leaves behind her dear brother Brendan (Brian) Reid and his family in Dublin.

Always a glass-half-full optimist, Beryl lived her life with compassion, good humour, and a deep inner well of great joy.  She was always proud of her Registered Nurse qualification from Mile End Hospital in London. Following her graduation, and Wladek’s graduation in Engineering from the University of London, Beryl and Wladek emigrated to Canada from the UK in 1954, settling in Montréal.  Beryl worked as a nurse at the Queen Elizabeth Hospital in N.D.G and later at the Reddy Memorial Hospital in downtown Montréal. With great strength and compassion, Beryl was Wladek’s primary care giver for the over 40 years he lived with quadriplegia due to MS. After Wladek’s passing in 1998, Beryl relocated to Ottawa to be nearer her grandchildren. Blessed with a beautiful singing voice, Beryl was choral singer throughout her life, including at St. Monica’s Church in Montreal and at St. Patrick’s Basilica in Ottawa. Beryl was herself practical and unsentimental, but she could bring a tear to your eye with her rendition of Maidin i mBéarra.

When she was a young girl in Ireland, an old woman told Beryl she would make a happy marriage to a foreigner, sail across the sea and settle in a distant land, have a son and a daughter, a wheelchair would feature in her life, she would live a long, long life, and be wealthy when she died.  And so she was: rich in good health, great happiness, deep faith, and most of all in love.

In lieu of flowers, a donation in Beryl’s memory to the charity of your choice would be appreciated.

Evidence of a life well-lived, and a mission accomplished. Godspeed!

So sorry to hear about your Mum. She lived an exceptional life.

My sympathies to you and your family Angela. She was a lovely lady.

Lily and I, are deeply saddened to hear the news of Beryl's passing away! We don't have enough words to console the bereaved family members. May she rest in peace.

Angela, your mother sounded like an amazing woman. My deepest sympathies.

A moving tribute to a great woman. Blessings to your family.

Surely you are in a better place. Rest in peace.

My sincere condolences. I had the pleasure of speaking with Angela’s Mom a few times when I visited an elderly neighbour at the residence on Beechwood. Mrs Gawel was always positive and spoke with pride and love of her family, especially her grandchildren.

Rani and I are deeply shocked and saddened to hear the sad news about your mom. May she Rest In Peace.Blessings for the family.