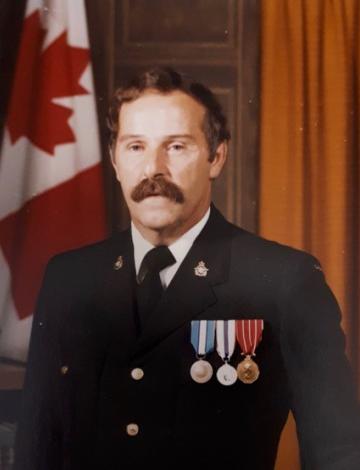 In the early afternoon of June 27, a beautiful day to be at the duck pond, Gord passed away at the Perley Rideau Veterans’ Health Centre with his wife at his side.  He was a few weeks shy of his 90th birthday.

Gord was born in Halifax, the youngest of six children, to Geneva and Howard.  His brothers Art, Al, Justin, Victor, and sister Anna predeceased him.

Gord enjoyed a career in the Royal Canadian Air Force, starting first as a photographer.  In 1968, he was commissioned from the ranks to the public affairs and communications directorates in Winnipeg, North Bay, Lahr, West Germany, and Ottawa.  Peacekeeping missions took him to Egypt, Africa and Cyprus.  He told us often how much he loved his work and the many interesting politicians, journalists, authors and military members he met over the years.

On retirement, he pursued a second career working with youth, first the air cadets and then young people experiencing employment challenges.

Gord’s special gift was his ability to connect with people.  He often spoke to strangers, in store lineups, on downtown streets, in restaurants.  He usually had a quip, a humourous observation or a question that left someone smiling, maybe reflective, and perhaps with a few more dollars in their pockets.

The people who knew him remember he might have said something that resonated tremendously in their lives, maybe even changing its course. He stayed in touch during difficult times.   He wrote hundreds of cards and letters, and loved to speak on the phone for hours. He softened the blows of life for all of us, whether with kind words, unfailing humour, experienced insight or compassion and empathy.

Gord embraced life with tremendous optimism. He had a deep and abiding love for Canada and its natural beauty. He was an accomplished photographer, equestrian, gardener, canoeist and outdoorsman.  He passed on to his children from a young age his appreciation for the arts.  Above all, he cherished his family and friends.

Dad has asked that you “Take me for a spiritual walk in the country, worship the miracle of nature, breath the fresh air that is Canada.”

In lieu of flowers, the family requests that you consider a memoriam donation to the Perley Rideau Veterans’ Health Centre, where Dad was cared for by the many angels of humanity on Gatineau 2 North over the past year.  Special thanks to Lena Nelson, who brought her energy, creativity and life force to Dad over these especially difficult last three months.  Janet Band was an important support to Dad for the time she was able to be with him.

There will be a private interment at a later date.

My deepest condolences to Pam and her family. My thoughts and prayers are with you.